Stock Watch: Great to be Spieth; Rough time for Davis 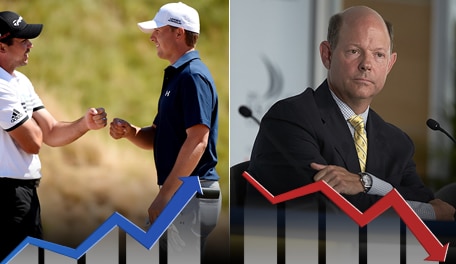 Jordan Spieth (+10%): He won with flawless golf at Augusta, and now ugly golf at Chambers Bay. The strength of his game is that he has no weaknesses.

Grand Slam talk (+8%): As if a return to St. Andrews wasn’t exciting enough – Rory’s defense, Watson’s farewell, the Home of Golf for goodness’ sake – we now have the possibility (likelihood?) of Spieth nailing down the year’s first three majors. Whoa.

Jason Day (+6%): They won’t make a movie out of his gutsy week at the Open, but to finish in the top 10 at the toughest major, on one of the most grueling walks of the year (eight miles, 195 feet of elevation change), with those symptoms, was a remarkable feat.

King Louie (+5%): Would he have won in a rout if he weren’t paired with Tiger? Only half kidding, because that sweet swing was grooved at Chambers. Just in time for his St. Andrews Open defense.

Michael Greller (+4%): Spieth’s caddie was so popular at Chambers Bay, he purposely kept his head down to avoid getting distracted by all of the reminders from his past, including his former students and principal. A well-deserved, full-circle journey for one of the game’s good dudes.

Steve Williams (+3%): OK, so Chambers’ greens didn’t reward the best putters, but surely it’s not just a coincidence that Adam Scott challenged for a major with Stevie back on the bag. He’ll be a force the rest of the year.

Branden Grace (-1%): One of golf’s most underrated talents missed only two fairways Sunday, but his foul ball on 16 was one of the worst shots of the week – at least 50 yards right of where he was aiming.

DJ (-3%): Gotta feel for Johnson, who had almost no chance to hole that lightning-fast eagle putt. He is the sport’s Teflon man, but this close call will hurt even more than his other near-misses.

Phil’s Grand Slam hopes (-4%): Chambers was his last best chance to win that elusive Open, and he got his annual flirtation out of the way on Thursday. As he gets more crooked off the tee, his only other reasonable opportunity is Erin Hills in 2017. He’ll be 47.

Tiger (-5%): Another start, another worst-ever performance. Maybe he’s done. Maybe he’s not. But his fall from grace has been so dramatic, how incredible would it be if he were to once again come back and win?

Chambers Bay (-6%): The course is spectacular visually and a blast to play under normal conditions, but it proved to be seriously flawed for an Open: the USGA wasn’t as forthcoming about the quality of the greens as it should have been, and the spectator experience was one of the worst this scribe has ever witnessed. Rare is the Open one-off, but many obstacles remain before another major comes back to University Place.

Mike Davis (-8%): Though he should be applauded for dialing up a lively Sunday setup, it’s clear now that he plays too prominent of a role at the year’s second major. With so much pent-up frustration with the USGA – the past failures, the anchor ban, the pre-Chambers bluster – this was a make-or-break Open for Davis and Co. He seemed to lose many players’ trust, perhaps for good.