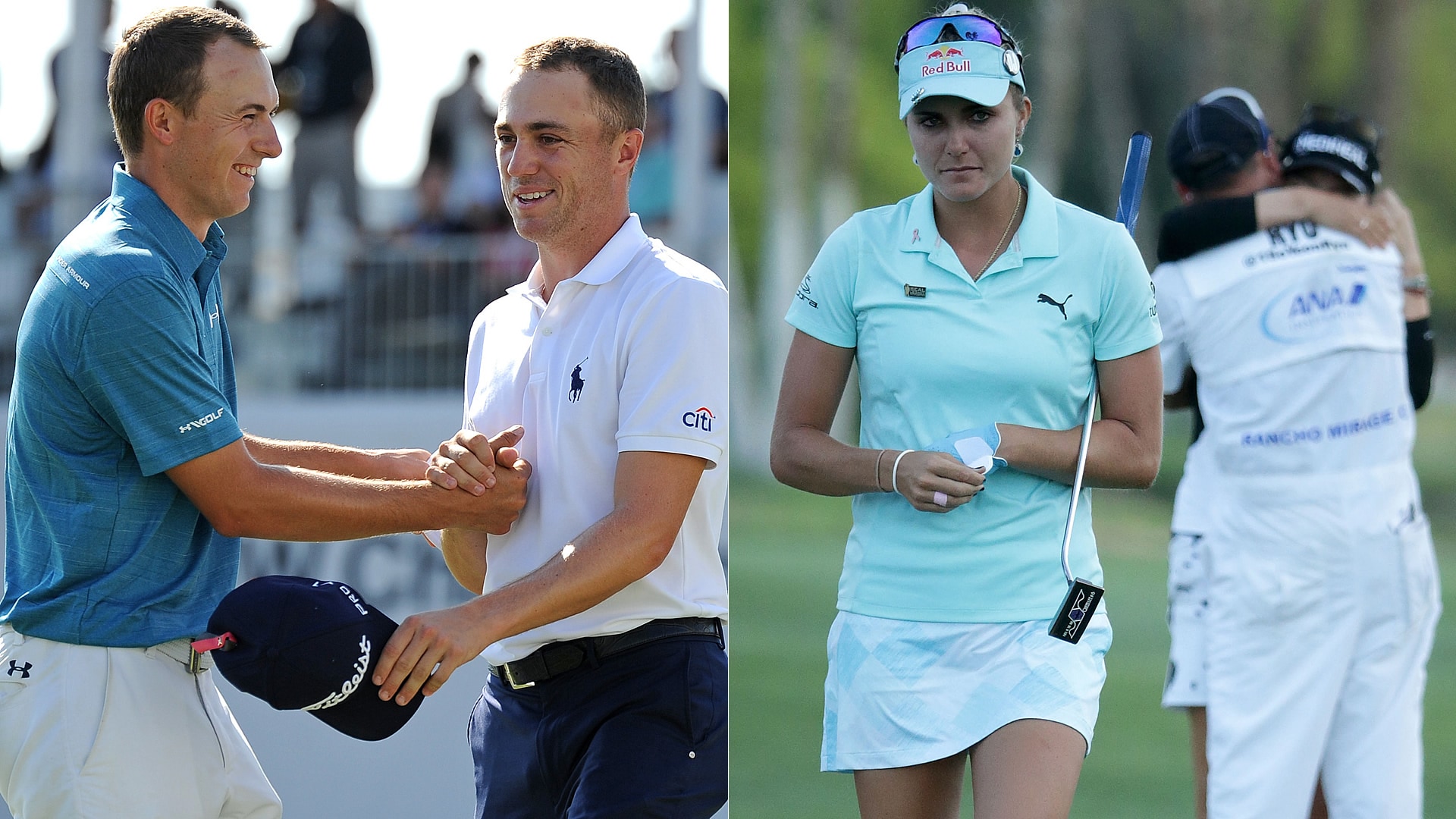 This week, we’re examining which players’ stocks and trends were rising and falling in the world of golf in 2017.

JT (+10%): No longer just Jordan Spieth’s “good buddy,” Thomas asserted himself as one of golf’s superstars with a breakout 2017 that included his first major, a FedExCup title and Player of the Year honors. If he stays hungry, Thomas should close the gap on Spieth.

Jordan (+9%): It was his iron play and mental fortitude – not his famously hot putter – that carried him to another major title. Those memorable final six holes at Birkdale epitomized Spieth’s unique gifts.

Team USA (+8%): After steamrolling the competition in the past two international events, and with its core intact, the talented, fearless, young Americans will head to France as heavy favorites as they look to win on foreign soil for the first time in 25 years.

Jon Rahm (+7%): In just a year and a half, he has skyrocketed from 551st in the world to No. 4. There are no holes in his game – he ranked third on Tour in strokes gained-tee to green – and it’s a matter of when, not if, he wins majors and challenges Dustin Johnson for the top spot.

Tommy Fleetwood (+6%): The Englishman might look more like a grunge rocker than an elite player, but he broke out in a big way this year, winning twice, finishing runner-up in two events and taking the season-long European Tour title.

Xander Schauffele (+5%): Just six months ago, he was a struggling newcomer who was in danger of being sent back to the minors. He held his own at Erin Hills, won a few weeks later at The Greenbrier and used a torrid back nine in the playoffs to reach the Tour Championship, which he won to collect a $4 million bonus. Not bad, rook.

Patrick Cantlay (+4%): One of the year’s feel-good stories, after being sidelined for years because of an injury and personal loss, the former No. 1-ranked amateur reminded observers of his immense potential, winning in Vegas for what should be his first of many titles.

Caddie-bros (+3%): How about this trend: Five of the top 12 players in the world ended the year with a caddie who had no prior looping experience. It seems players these days want friends with them inside the ropes, not grizzled veterans.

Lexi (+2%): Yes, she developed even more scar tissue after two heartbreaking losses, but Thompson made huge strides by shoring up her biggest weakness (putting) and nearly completing a dominant season. Perhaps next year she’ll put it all together.

Tiger (+1%): He seems happy and healthy, and best of all his game showed plenty of promise. Tiger vs. the generation he created is the battle we all want in 2018.

Lydia (-1%): The former teen phenom and world No. 1 changed coaches, equipment and caddies … and then had a winless year. Go figure.

Women’s No. 1 (-2%): Five different players held the top spot this year – and another, Lexi, should have – which is concerning for a tour that desperately needs a dominant player to reach a mainstream audience.

J-Day (-3%): On the top of the world at the start of 2017, he endured a difficult year on and off the course, with a slumping long game, his mother’s health scare and the deterioration of his relationship with longtime caddie/father figure Colin Swatton.

Rory (-4%): His injury-plagued year was so disappointing, he decided to shut it down this fall, before the end of the European Tour season. He should show up in January highly motivated – and, hopefully, with improved wedge play and putting.

Season finales (-5%): The rarely fair (and usually awkward) ending to the FedExCup might soon include a one-day, $10 million shootout for the top players after the Tour Championship. Because apparently 18 or 36 holes better determines a season-long race?

Bubba (-6%): Changing his golf ball was always a silly risk for someone who shapes the ball as much as Watson. Now he’s outside the top 80 in the world and without a ball deal for 2018.

Major records (-8%): Thanks to Branden Grace and Justin Thomas, there is now a sub-63 score in a major and a 9-under round at the U.S. Open. (Sorry, Johnny.) Unless the governing bodies address equipment technology, this could become an annual occurrence.

Presidents Cup (-9%): Time to blow this thing up and try again. The U.S. won by eight at Liberty National (and it wasn’t even really that close) to extend its record in the biennial event to 10-1-1. The Tour’s brainchild is not a compelling product.

Rules issues (-10%): After another year of head-scratchers – from Lexi’s post-round scorecard penalty to Bernhard Langer’s questionable putting stroke to a non-concession at the U.S. Girls’ Junior to the increased use of backboarding on Tour – here’s wishing more officials could use common sense and not the strict, overly penal rulebook.