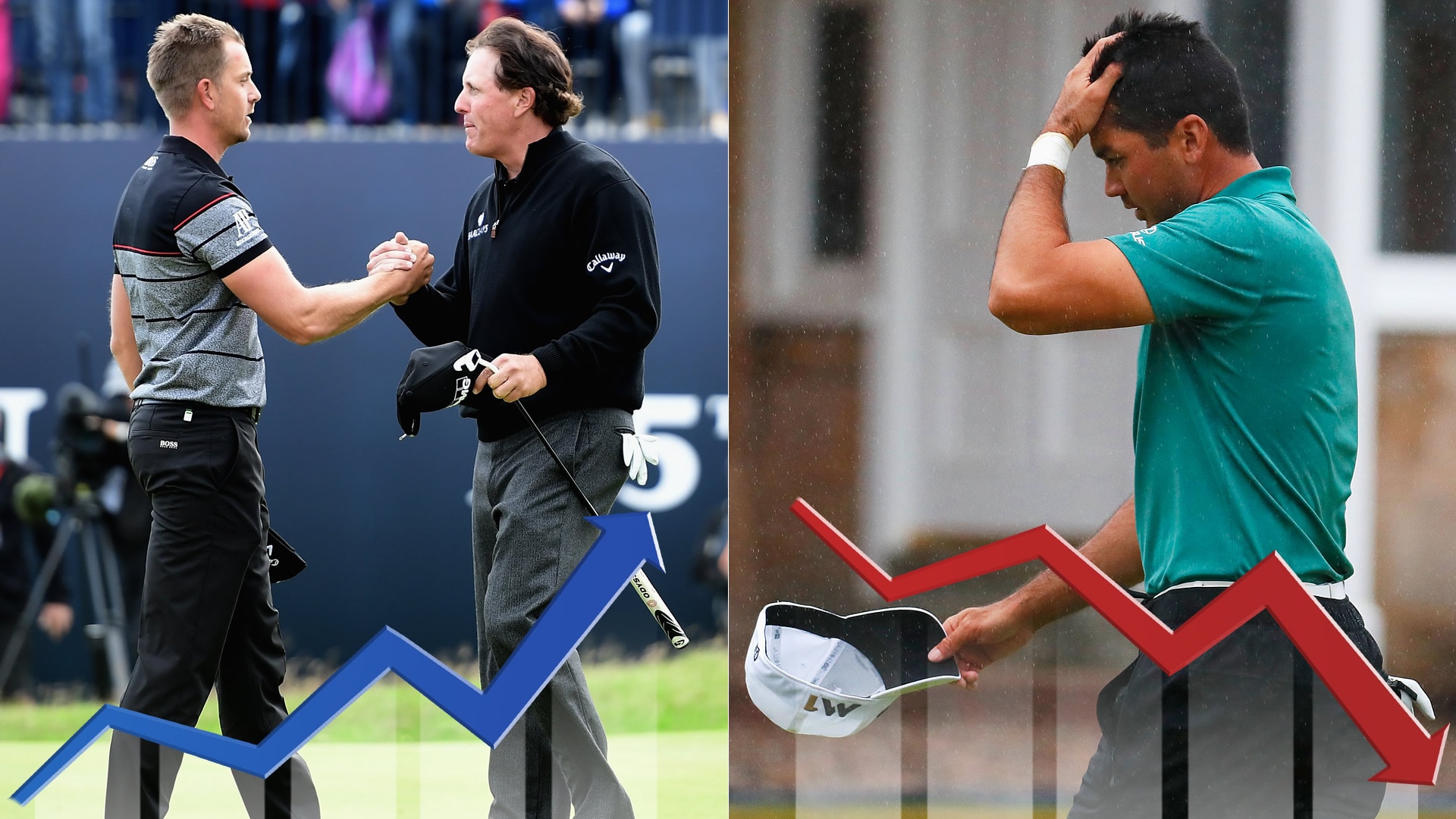 Henrik Stenson (+9%): His two-bogey 63 Sunday will be immortalized, but it was his second and third rounds – a best-of-the-day 65 and 68, respectively – that won him The Open. From start to finish, it was links perfection.

Phil (+7%): Of the 11 career runners-up in majors, Troon might be the hardest for Mickelson to accept, for it was a loss without a mistake. The good news? He illustrated yet again that his window of opportunity is far from closing.

Troon Open (+5%): Hope you enjoyed the show, because it’ll be decades before we witness another display of golf like that. It was the “Duel in the Sun,” only better.

Beef (+4%): One of the enduring images from the week will be eighth-place finisher Andrew Johnston, wearing a Scottish cap, guzzling a Heineken on the front lawn of the clubhouse, taking pictures and whooping it up with fans on Sunday evening. His cult-like following grew even larger after his breakthrough performance at The Open.

J.B. Holmes (+3): Only three players in the OWGR top 50 have a pair of major top-fives this season: Holmes, Dustin Johnson and Sergio Garcia. The titanium-denting Holmes, now a lock for the U.S. Ryder Cup team, should be a trendy pick for next week’s PGA.

Steve Stricker (+2%): The 49-year-old usually skips the year’s third major because it conflicts with his wedding anniversary, but the missus green-lighted his trip overseas this year. Good thing, because Stricker finished fourth (his best result in a major since 1998) and punched his ticket to three majors, including the 2017 Masters.

Bill Haas (-1%): Sure, he deserves credit for notching his first major top-10 in 28 tries, but instead of applying pressure on the leaders he faded badly during a Sunday 75, the worst score of anyone in the top 45.

Billy Horschel (-2%): Speaking of bad finishes … his 67-85 line at Troon instantly belongs on the list of all-time skids.

Golf gods (-3%): It’s the only explanation, really, for how Mickelson was robbed twice on the greens: (1) His putt for 62, which somehow caught the right edge and spun out; and (2) his eagle putt on 16 Sunday, which crossed the front of the cup and would have lifted him into a share of the lead.

Big 4 Bust (-4%): Rory McIlroy (T-5) and Dustin Johnson (T-9) backdoored top-10s, but it was a collective, and rare, off-week for the game’s biggest stars. Here’s guessing that won’t be the case at Baltusrol.

Olympic cutoff (-8%): Are travel arrangements and uniform fittings really that complicated? Had the International Olympic Committee pushed back the deadline to announce the teams one more week, after The Open (a freakin’ major!), then Mickelson would be on the American squad, restoring some of the luster to the much-maligned event.