Stock Watch: Paula's back! Tiger's back 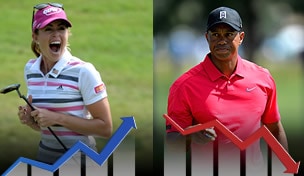 Getty Images
PEBBLE BEACH, CA - FEBRUARY 11: Steve Young plays a shot near the 18th green during the first round of the AT&T Pebble Beach National Pro-Am at the Spyglass Hill Golf Course on February 11, 2016 in Pebble Beach, California. (Photo by Robert Laberge/Getty Images)  -

Paula (+9%): What was more fun to watch: the 75-foot eagle bomb, or the pure, unadulterated joy in Creamer's reaction? Save for another Big Wiesy win, this was the best possible outcome for the LPGA.

Russ Henley (+6%): Was he fortunate to be in a position to win Sunday? Of course. But the former college star was still the only one to find the green in two and make birdie in the playoff. He’s now one of four players under 25 with multiple Tour wins.

Patrick Rodgers (+5%): The world’s No. 1 amateur will turn pro after NCAAs, but until then he’ll continue chasing Tiger’s Stanford records. Of the many talented kids in the college and amateur ranks, this is the one who possesses Spiethian potential.

Rory (+4%): Once again he has the confidence, trust and saunter. All he needs to remember now is how to close out tournaments. The Sunday 74 was his biggest on-course setback since the walk-off a year ago, but we’re still bullish on his Masters prospects.

Ryan Palmer (+2%): At the Honda the genial Texan reminded observers of his streaky talent, posting his second runner-up in his last four starts. It would surprise little if he soon snuck up and stole a trophy.

Brendon de Jonge (-2%): Still winless on the PGA Tour, the big Zimbabwean went from the final group Saturday to a 76-78 weekend and T-63 finish. He complained of sore ribs afterward – probably because of the punch to the gut.

Hennie Stennie (-3%): No top-10s in the calendar year, and he beat only six players at the Honda. Good thing he has 19 million ($) ways to console himself.

Paddy (-4%): The three-time major winner’s game has hit the skids, and his latest trunk-slammer (his fourth in five starts) might have been the most frustrating. On the cut line and playing his last hole at PGA National, he caused his ball to move in the pine straw and made double. Gone.

Phil (-6%): Lefty might want to rediscover his putting stroke in the next five weeks. He’s currently ranked 114th on the greens and, last we checked, that part of the game is rather important at Augusta.

Tiger (-7%): About the only way his miserable start to the season could have gotten worse was if he got injured – again. Welp, here we are, with the kind of nagging ailment that can linger for years.