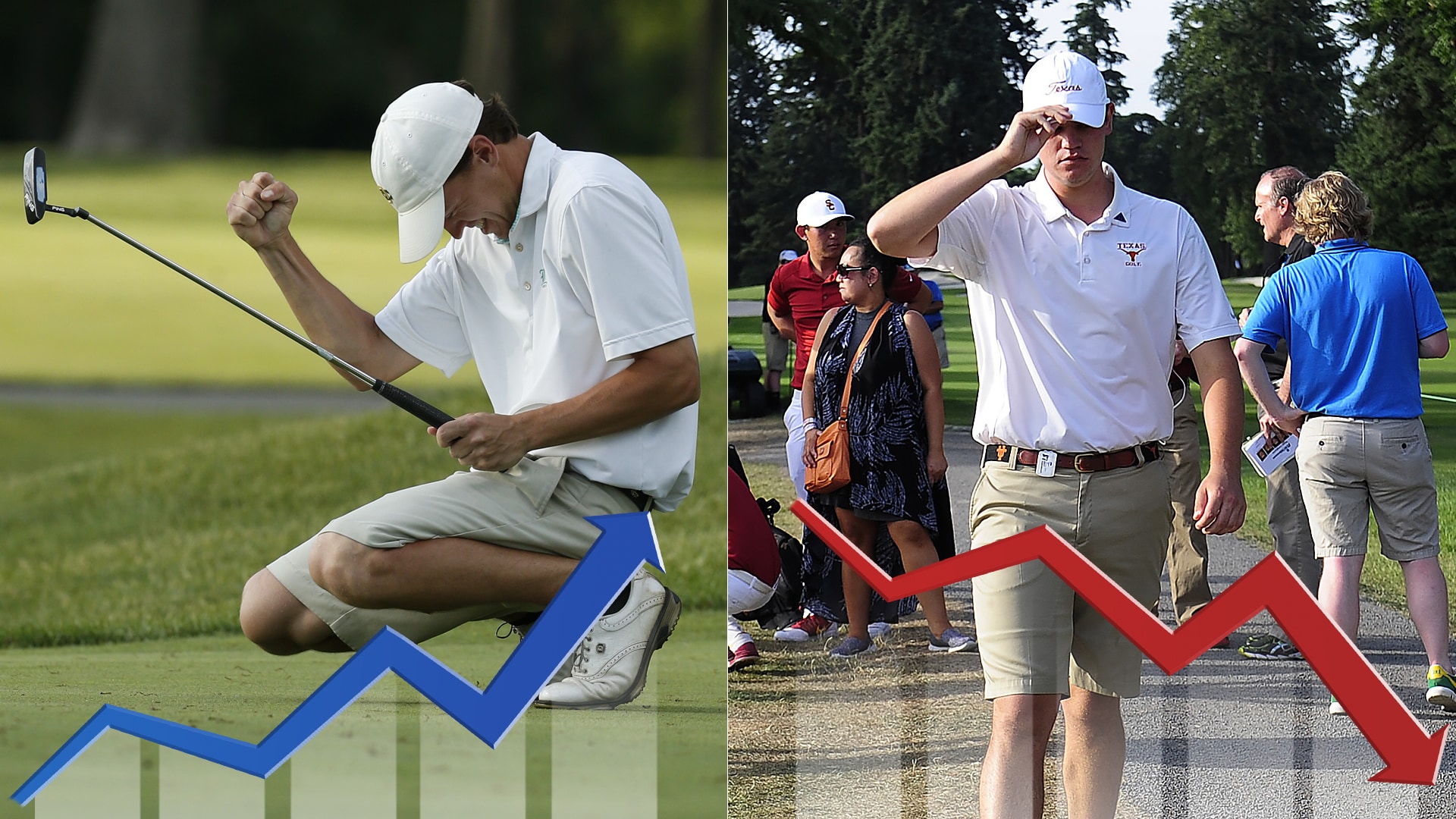 Will McGirt (+6%): Though he likely won’t resonate with the casual fan, McGirt’s Memorial victory was hard-earned, after years of toiling on mini-tours and trying to find his way. He’s yet another welcome reminder that not every Tour player is a former prodigy.

U.S. Open qualifying (+5%): It’s one of the best days on the golf calendar, with weathered veterans, baby-faced amateurs and 9-to-5 nobodies teeing it up for the chance to play at the most torturous Open venue.

Aaron Wise (+3%): If you’d never heard of the Oregon star before NCAAs, now you understand why Casey Martin has been so effusive in his praise over the past few years. With an NCAA title and a U.S. Open qualifying spot now on his résumé, Wise – a player many liken to Charles Howell III – is off to a flying start.

NCAAs (+2%): The men’s and women’s championships made clear what many college observers have known for years: Few events can rival the drama, excitement and intensity of team match play. Which makes the Olympic format all the more frustrating.

Women’s PGA (+1%): Storylines abound at the second women’s major of the year: Ariya Jutanugarn going for four victories in a row, overall; Inbee Park going for four-in-a-row at this event; Lydia Ko aiming for her third consecutive major; and, oh yes, an early-round grouping of Korean rivals In Gee Chun and Ha Na Jang, their first encounter since that tabloid escalator incident a few months ago.

Ian Poulter (-1%): Yes, he’s out of action for the next four months because of a foot injury, but he wasn’t tabbed as a Ryder Cup vice captain to drive a cart or hold an umbrella – he’ll be the Europeans’ biggest cheerleader, which is sure to antagonize the heck out of the Americans. It should be delicious fun.

Matt Kuchar (-2%): That’s four consecutive top-10s for golf’s steadiest presence, but he faded badly during a back-nine 39 when the conditions turned. He can’t smile away this close call.

Dustin Johnson (-3%): Somehow, he found a way to lose the Memorial with four back-nine bogeys, even though he launched five drives longer than 315 yards. As much as we’d like to install him as the favorite for Oakmont – his long-and-straight driver is a massive advantage, especially if it plays soft – it’s getting ever harder to make that leap.

Beau Hossler (-4%): His shoulder injury couldn’t have come at a worse time – before the championship match, before a U.S. Open sectional, before embarking on a busy summer schedule of pro events. Here’s hoping he heals fast, because it was shaping up to be a monster 2016.

Doral (-8%): Now that the PGA Tour has left town, visitors to the Miami resort are left with a $450 price tag and a course that is too penal for the average player.