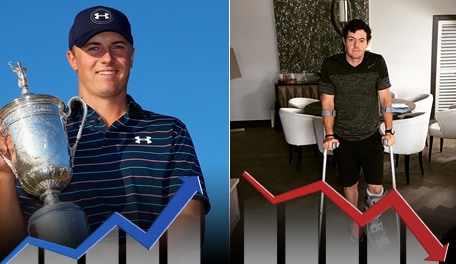 Danny Lee (+6%): His is a story of endurance, because The Greenbrier was Lee’s 27th start – two more than any other player on Tour. The $1.2 million paycheck should help defray some of his mounting travel expenses.

Kevin Kisner (+5%): That’s three playoff losses in 11 weeks, providing yet another reminder that this truly is a game of inches – he is six inches away from an epic season.

Spieth Slam (+4%): Sure, there’ll be more attention on the kid because he’s the only big story at St. Andrews, but Rory’s near-certain absence makes the path to the claret jug clearer for everybody – especially the world No. 2.

Robert Streb (+3%): It’s so easy to belly a wedge! … uh, not when there are Sunday nerves and three feet of break. Making five back-nine birdies to get into the playoff was one of the most remarkable feats this season.

Sophie Gustafson (+2%): After a successful playing career that included eight European Solheim Cup teams, the 41-year-old has moved to the other side of the bag to caddie for Beth Allen. Gustafson proved adept at that, too – she guided the American to her first Ladies European Tour title.

Tiger (-1%): His proximity to the hole at The Greenbrier (23 feet, 11 inches) was his best since ShotLink began keeping the stat in 2003. Topping the field in that category used to lead to blowout victories. This time, he finished 32nd on an easy resort course against a weaker field, which suggests that there is still much work to be done.

Justin Thomas (-2%): Taking a one-shot lead to the back nine, he four-putted from 13 feet and blew up with an inward 43. Those are rookie mistakes that he’ll learn from.

Golf’s reaction to Donald Trump (-7%): So much for a public scolding. Four of golf’s leading organizations had a chance to distance themselves from the blustering businessman, but instead issued what was essentially a 79-word slap on the wrist.

Rory (-8%): Devastating news on a number of levels: For McIlroy, who was trending toward a win at the Home of Golf; for Spieth, who will face even more pressure to capture the third leg; for the Open, which will likely be without the No. 1 player in the world; and for the sport in general, which has generated so much momentum in the past few months only to be dealt a huge blow during the busiest time of the year.