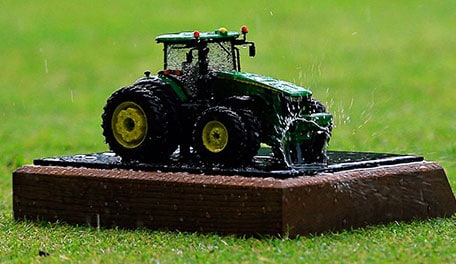 SILVIS, Ill. – Play was suspended for just under three hours Saturday at the John Deere Classic after two weather delays.

Play was first halted 8:54 a.m. local time with lightning in the area, and players stayed off the course for 57 minutes before returning at 9:51 a.m.

The horn sounded a second time at 11:29 a.m. after more rain left the golf course unplayable. The third round once again resumed at 1:20 p.m.

The Quad Cities area was hammered with rain earlier this week, as TPC Deere Run took on more than three inches Monday.

Roberto Castro, who began the day seven shots back of leader Justin Thomas, played his first four holes in 4 under thanks to a birdie-eagle-birdie-par start. He was the low man on the course at 9 under for the championship before played was halted the second time.

Lift, clean and place rules are in effect for the third round.