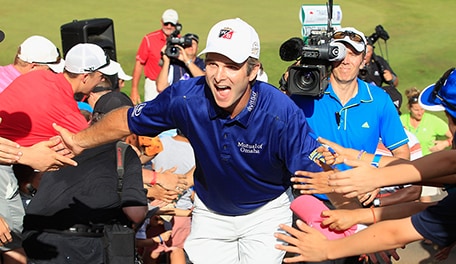 Getty Images
Webb Simpson chips onto the green on the third hole during the weather-delayed final round of the BMW Championship at Aronimink Golf Club on September 10, 2018 in Newtown Square, Pennsylvania. (Photo by Drew Hallowell/Getty Images)  -

Kevin Steelman fired a final-round 64, making birdie on each of his last seven holes, to win the 2014 Travelers Championship. Here are the highlights from a wild finish at TPC River Highlands:

What it means: The victory is Streelman's second on Tour, following his win at the Tampa Bay Championship last year. Three shots back to start the day and 1 over through his first 11 holes, Streelman closed with seven consecutive birdies to finish 6 under on his round and 15 under for the championship, besting runners-up Sergio Garcia and K.J. Choi. His seven straight birdies to win a tournament set a PGA Tour record. Streelman had only registered one other top-10 finish this season - at the ISPS HANDA World Cup of Golf back in November - and had missed the cut in his last four events, dating back to the Players Championship.

Best of the rest: Choi and Garcia both missed lengthy runs at birdie on the 18th green to post matching 67s and finish one back of Streelman at 14 under. Playing in the final group, Aaron Baddeley had the last chance to force Streelman to a playoff but could not find the fairway on 18 and instead drew a horrendous lie in the rough. After gouging out, Baddeley's pitch shot to tie Streelman ran buy the hole, securing a Streelman win. Baddeley bogeyed the last to finish his round 1 under.

Biggest disappointments: Overnight leader Ryan Moore bogeyed his opening hole and never got back on track. Moore was 3 over at the turn and closed with a final-round 71 to finish three shots back. Scott Langley, the 36-hole leader, looked as if he was poised to make a run after three birdies in his first three holes but finished his first nine and his round 1 over after two bogeys and a double.

Shot of the day: Given the timing and situation, it has to be Streelman's wedge from the fairway on 18. The shot just carried the front right bunker before taking a couple hops and checking up below the hole. Streelman went on to make his birdie putt and win the tournament.

Quote of the day: "It was just one of those days where I felt like I couldn't miss." - Streelman.