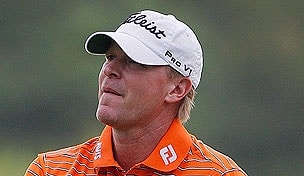 Getty Images
RIO DE JANEIRO, BRAZIL - AUGUST 13: Henrik Stenson of Sweden tees off on the first hole during the third round of the Mens Individual Stroke Play event on Day 8 of the Rio 2016 Olympic Games at the Olympic Golf Course on August 13, 2016 in Rio de Janeiro, Brazil. (Photo by Ross Kinnaird/Getty Images)  -

HUMBLE, Texas – Steve Stricker wasn’t about to miss his beloved Wisconsin Badgers in the Final Four.

So he finished his third-round 76 at the Shell Houston Open, was on-board a private jet by 3:45 p.m. CT and 40 minutes later was on the ground in Dallas. Stricker and the rest of his group – which included his family, caddie Jimmy Johnson and Eric Larson, Jeff Overton’s looper – walked into AT&T Stadium just in time for the national anthem before the first NCAA semifinal game, Florida vs. Connecticut.

Stricker settled in his eighth-row seat in the Badgers’ section – behind NFLers Russell Wilson and J.J. Watt, and Madison resident and current Ryder Cup assistant captain Andy North – and later that night watched the Badgers lose a heartbreaker, 74-73, after Kentucky hit a 3-pointer with 5 seconds to play.

“It was just a bummer the way it all ended,” Stricker said after his final round Sunday. “It was like somebody’s dog died the way everybody felt.”

Getting out of the stadium was no easy chore, with 79,000 fans spilling out into the night. Stricker didn’t return to his hotel until 1:30 a.m. and didn’t fall asleep until about 2. His alarm went off four hours later, at 6.

“I felt like I was hungover,” he said, “and I don’t really drink. I haven’t stayed up that late in a long time.”

Stricker said the lack of sleep didn’t affect his final-round play at all, and his closing 71 left him in a tie for 25th.