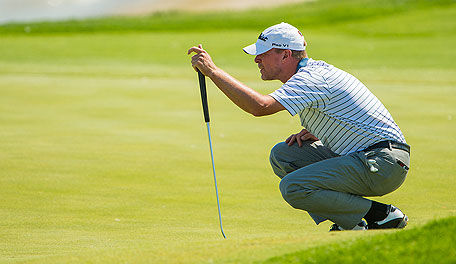 SHEBOYGAN, Wis. – Wisconsin’s Steve Stricker got a standing ovation coming off the 18th green Sunday at the PGA Championship.

He kissed his wife, Nicki, who caddied for him this week and then tipped his cap and waved to all those fans cheering for him at Whistling Straits.

“I took a moment there,” Stricker said. “I don’t get that too often. That was special for me.”

Stricker, 48, isn’t sure if it will be his last major championship appearance. He needed a top-15 finish to qualify for next year’s PGA Championship, but a 2-under-par 70 left him tied for 23rd as he left scoring. With his offseason back surgery, and his limited schedule, he has slipped to 138th in the world rankings. He isn’t currently qualified for another major.

“I don’t know,” Stricker said when asked if he thought it might be his last major. “That’s a tough question. Obviously, I’m not going to give up trying. It could be my last, but I’m still trying to get in them.”

Notably, the U.S. Open is scheduled to be played at Erin Hills in Wisconsin in 2017. Stricker wants to play that.

Stricker said he won’t likely tee it up again this year until the Franklin Templeton Shootout in December, an unofficial event. The good news for Stricker fans is that he leaves the PGA Championship optimistic about his game and feeling good about how his back has responded to the surgery.

“I feel like I passed the test,” Stricker said. “This was a good year to get under my belt just to check out the back situation and see what I could do and what I couldn’t.

“I’m still committed to what I’m doing, and that’s playing a limited schedule. I’m still enjoying that very much. But I also know I’ve got a lot of good competitive golf in me and still look forward to trying to compete and win again. That’s my ultimate goal, to get back in the winner’s circle.”

Stricker said he may start earlier next year, possibly playing the Sony Open in Hawaii and then the Humana Challenge in La Quinta, Calif.