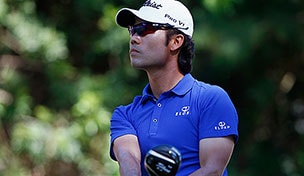 PALM HARBOR, Fla. – It could be a long day for Kevin Na – and the rest of the field – Sunday at the Valspar Championship.

Playing in the last group with Robert Garrigus, Na is only one shot behind with a $1 million first-place prize and Masters berth on the line.

An added Sunday wrinkle: The forecast calls for a steady 10-20 mph breeze, with gusts up to 30 mph. Pulling a club and visualizing a shot is already difficult enough at tree-lined Innisbrook.

Perhaps fearful of a Doral redux, though, the Tour has opted for a softer setup Sunday, cutting many of the final-round hole locations closer to the middle of the green. In all, 11 holes are eight or more paces from the fringe.

On Saturday, in ideal conditions, the final group of Garrigus and Na was put on the clock in the seventh fairway. Both players received a bad time – Na on the 13th tee, Garrigus while attempting to play his third shot on the 14th hole – though neither was given a one-shot penalty because they didn’t record a second bad time. They played the third round in 3 hours, 54 minutes.

“I try to play my game and try the best I can where I don’t affect the guys I’m playing with, and I don’t think I have been,” Na said. “Obviously I have days that are a struggle for me. If I’m struggling, hitting it sideways, it’s going to take longer. I have to grind it out. Most of the time I felt like I improve 90 percent of my pace of play, so I don’t think it’s fair for me to be criticized.”

Both Garrigus and Na have one career PGA Tour title. None of the top 3 players on the leaderboard – including John Senden, two shots back – is currently is the Masters field.