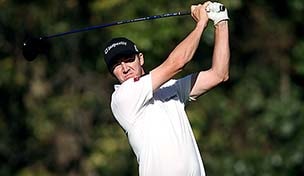 LOS ANGELES – After winning the AT&T Pebble Beach National Pro-am, Jimmy Walker packed his family in their RV Monday morning and made the long drive south to Riviera Country Club.

Nobody would have been surprised if he figuratively ran out of gas, if his competitive tank hit empty before arriving for the Northern Trust Open.

After all, Walker has already won three times in this wraparound season, two in his last three starts. Winning – and all that goes with it – can be exhausting emotionally.

Walker, apparently, has a big tank of motivation in reserve.

Closing fiercely Thursday with three consecutive birdies, Walker posted a 4-under-par 67 to get right back on the leaderboard at Riviera. He’s among 11 players just a shot behind Dustin Johnson.

Walker loves Riviera, and that helps keep the intensity up, so did all the energy in the buzz his winning created among fans following him.

“You can feel it,” Walker said. “I can feel it. I can hear it. It's different. It just is. It's really fun to have everybody watch last week and say `good job’ and `way to win’ and `keep it going.’ It’s so fun.”

At 35, Walker is experiencing the kind of attention he has never received before. He was asked if it’s something he’s enduring or enjoying.