Tale of the tape: J-Day vs. Dubuisson 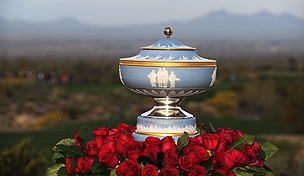 Getty Images
SHANGHAI, CHINA - NOVEMBER 07: Haotong Li of China plays his second shot on the par four 3rd hole during the third round of the WGC - HSBC Champions at the Sheshan International Golf Club on November 7, 2015 in Shanghai, China. (Photo by Ross Kinnaird/Getty Images)  -

The final is set at the WGC-Accenture Match Play Championship: Jason Day vs. Victor Dubuisson.

Here is a quick tale of the tape between the two finalists, who comprise the youngest final match in event history.

World ranking implications: Could move to No. 4 in the world with a win; No. 6 with a loss

Best match this week: Round 2, when he defeated Billy Horschel in 22 holes. Three down through four holes, Day battled back to all square on 17 tee. He won with a birdie on the fourth extra hole in what matched the longest match of the week.

The skinny: Day has proven to be one of the best match-play performers in the world, moving to 13-3 in this event with an impressive semifinal victory over Rickie Fowler, who had already scored upsets over match-play maven Ian Poulter, red-hot Jimmy Walker, in-form Sergio Garcia and gritty veteran Jim Furyk. After a neck-and-neck battle with Billy Horschel in Round 2, Day hasn’t needed to play the 18th hole in his past three matches. Save for a poor performance at Pebble, Day hasn’t finished outside the top 25 in an event since August. That includes his victory at the World Cup at Royal Melbourne. He hasn’t won officially on the PGA Tour since the 2010 Nelson.

World ranking implications: Could move to No. 15 with a win; No. 23 with a loss

Best match this week: Semifinals, when he defeated Ernie Els, 1 up. Listless at the start against Els, Dubuisson reeled off wins at Nos. 8, 9, 11 and 12 to seize an improbable 1-up lead. After a birdie at the short 15th, he two-putted for par from long range on the list – and watched as Els missed his 13-footer for par – to advance to the finals.

The skinny: The Frenchman already appeared likely to make his Ryder Cup debut in September, but he only solidified his position with a finals appearance here. With a victory, Dubuisson, at 23 years, 10 months and 1 day, could become the second-youngest winner of a WGC event, behind only Tiger Woods. He’d also become the first player to win in his WGC debut.