Tesori back on Simpson's bag, couldn't be happier 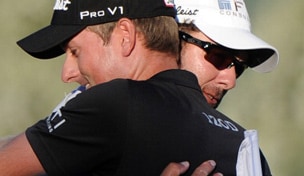 Getty Images
Canadian DeLaet, 67th-ranked, is in the field in San Antonio. He missed the cut last year in his only Masters appearance. (Getty Images)  -

SCOTTSDALE, Ariz. – For the first time this year, Paul Tesori is back caddying for Webb Simpson – and he’ll be smiling about it the entire time.

On Jan. 4, Tesori’s wife, Michelle, gave birth to a baby boy named Isaiah. There were immediate complications, as Isaiah was placed in the NICU unit at Wolfson Children’s Hospital in Jacksonville, Fla., believed to be fighting for his life.

Now, more than three weeks later, the baby has been diagnosed with Down syndrome, but has no other threatening health concerns.

And his proud papa couldn’t stop smiling while carrying Simpson’s bag around TPC Scottsdale during the Waste Management Phoenix Open pro-am on Wednesday.

“Five days later, and this is just where my faith comes into play, they actually said the seizure never happened, the brain flew past every test – they actually did five tests because they couldn’t believe everything was coming back clean; the heart valve was OK. So now we’re in a situation where we’re like, ‘All he has is Down syndrome? Alright, this is great.’ It’s almost a situation where we’re excited he has Down syndrome. I know that sounds weird.”

Tesori said Isaiah is already undergoing speech therapy, but is otherwise healthy. That’s a far cry from the frightening days following his birth.

“It’s something you don’t wish for your son,” he said. “It was by far the toughest situation I’ve ever been through in my life, because I felt so helpless. There was so much unknown in that first week. For everybody to do what they did, it was really something else.”

Tesori was blown away by the support his family received from the PGA Tour community.

“The support factor, I don’t even know how to put it into words. It was mind-numbing. Probably the most emotional I was the whole time was from the outpouring of support. You have your closest friends that you know you’re going to hear from, but there were so many players and caddies. Webb would call me at night and tell me, ‘Hey Paul, this guy, this guy and this guy said they’re thinking about you and praying for you.’

“I think a lot of times as caddies, we really don’t know anybody else really cares. It’s an individual sport. I mean, you’ve got guys asking, ‘Hey, how are you? How’s the family?’ That kind of stuff. But it really is a community of guys who are there for each other. For players to pick up the phone and call and text, it was more than I could ever imagine.”

He wasn’t the only one receiving that outpouring of support.

“My wife had probably 20-30 Tour wives going out of their way to send gifts, to email her and support her and uplift her,” he said. “That just made life even easier.”

Like any doting parents, Paul and Michelle have been posting photos of Isaiah on social media, sharing his story with friends and strangers alike.

When asked about his son, Tesori perked up, that ubiquitous smile of his growing even larger.