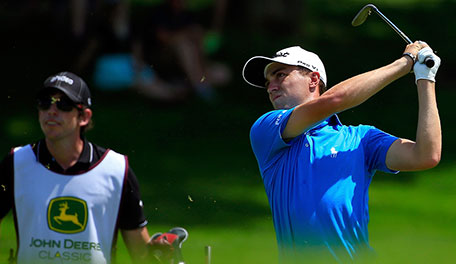 SILVIS, Ill. – Thanks to a pair of quality up-and-downs on his final two holes, Justin Thomas will enter the weekend at the John Deere Classic with the first overnight lead of his PGA Tour career.

Thomas followed an opening 63, tied for the low round of the week, with a 4-under 67 Friday to get into the clubhouse with sole possession of the lead at 12 under.

Referring to his pitch shot from the cabbage on 17 that led to his final birdie, Thomas said, “Yeah, I hate to sound like that, but it was really good. It was a bad lie. I mean, I was really hoping a drain was in my way so I could get a drop.

“If I could have given the ball to somebody and told them to give me a spot where I couldn’t get it up and down very easily, they probably would have taken it pretty close to there.”

Thomas got himself in yet more trouble on his final hole, missing the fairway well right and forcing a punch through the trees that just held onto the left edge of the green. A well-judged bump-and-run just a few feet from the pond that guards the 18th has him up one heading into the weekend.

Though this is the first time he’s been on top at the halfway point, it’s hardly the first time he’s put himself in position to win. A late dip into the canal at the Humana and a pair of Sunday 75s at The Players and The Greenbrier have kept him from his breakthrough victory, but they’ve also provided him with valuable experience he’ll be able to draw on this weekend.

Thomas has five top-10s this season and his score Friday tied him for the most rounds of 67 or lower on Tour this season, with 20. His second-round total also gave him his 43rd round in the 60s this season, which leads the Tour outright. It's all further proof he’s going to get it done sooner or later, and once he does, plenty more titles seem likely to follow.

“I’m extremely close [to winning],” Thomas said. “I’ve said that since Humana, since Phoenix. I’m just learning. Although I wouldn’t like it to take as long as it has, or as long as it could be, I just don’t know when it’s going to happen. I’ve just got to keep doing stuff like this to put myself in position and when the time is right, it’ll happen.”

In addition to his first victory, on the line this week for Thomas is a trip to Open Championship via the Qualifying Series. The top player who finishes inside the top five at the Deere and isn't already in the field earns a trip to St. Andrews. Has that entered his mind?

“Absolutely not,” he said.

Does he have his passport with him anyway?