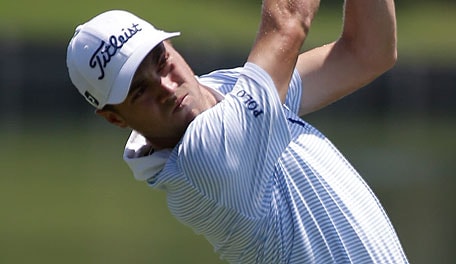 GAINESVILLE, Va. – At the beginning of the season Justin Thomas thumbed a lengthy list of things he wanted to accomplish during his rookie year on the PGA Tour into his cell phone.

Among that list was the usual: win a Tour event, contend at a major, he even put a pin in this year’s Presidents Cup and a spot on the U.S. team.

While there is still work to be done, most notably a victory, Thomas has secured himself a run deep into the FedEx Cup playoffs and possibly another one of his goals.

“The Tour Championship is one of my biggest [goals],” said Thomas following a closing 67 at the Quicken Loans National for his second consecutive top-10 finish. “I felt like if I missed the playoffs it would be a terrible year.”

That won’t be a problem now following his last two starts (he tied for fifth at last month’s John Deere Classic) which have moved him into the top 35 on the season-long points list.

Thomas cooled after a solid start to his year, which is common for rookies who are unaccustomed to playing so many tournaments. The Quicken Loans National is his 25th start of the season and he has two more tournaments (the PGA Championship and Wyndham Championship) before the playoffs, which means he could play as many as 31 events this year.

“When I look at it on paper I’ve never played that many events,” said Thomas, who is the top-ranked rookie on the FedEx Cup point list. “My body feels fine, but there have been some long stretches. I’ve learned a lot.”