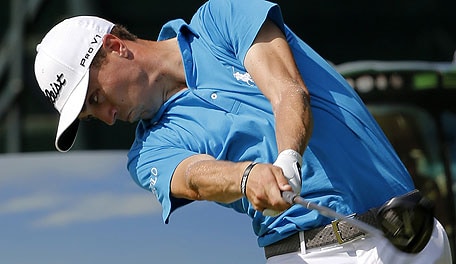 Through two rounds of the John Deere Classic, Justin Thomas is showing no lingering signs from last week's disappointment in West Virginia. Here's how things look at the halfway point at TPC Deer Run, where Thomas holds a one-shot advantage:

What it means: Thomas began the day with a share of the lead after an opening-round 63, and he kept up the onslaught with five more birdies en route to a 4-under 67. After letting a late lead slip through his fingers at The Greenbrier, the rookie is now halfway to his breakthrough win with veterans Wagner and Gillis his closest pursuers.

Round of the day: Wagner lost in a playoff earlier this season at the Shell Houston Open, and he made a big climb up the standings Friday with an 8-under 63. Wagner had four birdies in a row on Nos. 6-9 and added another four on the back nine as he looks for his first win since the 2012 Sony Open.

Best of the rest: Jordan Spieth was alongside Wagner in that playoff in Houston, and needing a strong round simply to make the cut, he delivered in style. The world No. 2 fired a 7-under 64, a round that included an eight-hole stretch with four birdies and an eagle, and at 7 under he has moved from the cut line to the fringe of contention as he looks to win this event for the second time in three years.

Biggest Disappointment: Nicholas Thompson shared the lead with Thomas after the opening round, but he dropped back with a 1-over 72. While most of the field racked up birdies, Thompson had only two circles on his scorecard and now heads into the weekend five shots off the pace.

Main storyline heading into Saturday: Thomas remains the player in the spotlight through two rounds. After a number of top-10 finishes this season, plus last week's T-54 finish at The Greenbrier when he held the lead with 10 holes to go before imploding, he seems poised for a victory that would vault him to the top of an already promising rookie class.

Shot of the day: Spieth was 241 yards away from the hole on the par-5 second, but he nestled his approach to inside 5 feet to set up an eagle that helped spark his comeback.

Quote of the day: "It's just repetitions. I'm getting on-course reps, and it's making a difference." - Spieth