Thomas will have to go through Spieth to get first win 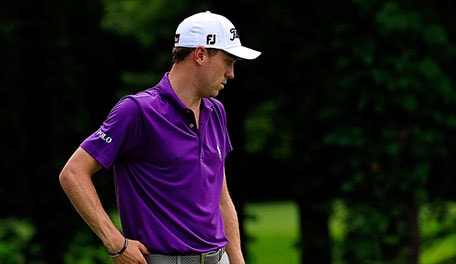 SILVIS, Ill. - Overnight leader Justin Thomas teed off about 90 minutes behind Jordan Spieth but was still close enough to him on the back nine to hear the roars from Spieth’s birdie-eagle-birdie finish.

“I mean, I obviously have no clue what he did,” Thomas said. “I was out playing. I just know that he shot 10 under, so I assume he did some stuff pretty well.”

He punched out of the trees and then holed out for eagle from the fairway on 17.

While Spieth was charging to the top of the leaderboard via a third-round 61 that only required 23 putts, Thomas needed 34 of them Saturday.

And so on a very soft and very gettable golf course, Thomas made just three birdies Saturday against a bogey as part of a 2-under 69. He’s gone from one shot ahead of the field to three behind his good friend and the guy who’s won the last two major championships.

If he wants to win his first PGA Tour title, he’s going to have to go through Spieth.

“Yeah, I mean I definitely put myself in a harder position than if some of those putts would have fallen in. But I mean I did all I could. If I hit a couple of them softer, I would have made them. .. But yeah, I’m in a good spot. I just need to keep within striking distance tomorrow. I need to go out and play a good round.”