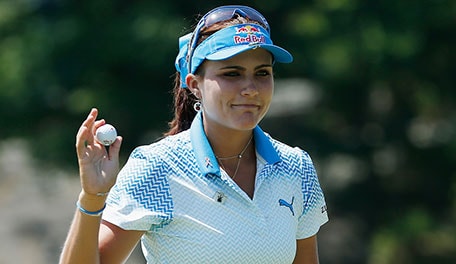 Thompson (third) equaled Sandra Gal (12th) for the low round of the day with a 7-under-par 66.

Thompson made eight birdies over the first 13 holes before a bogey at the 16th cooled her off. She takes some momentum into an important run in the women’s game. There are two more majors scheduled over the next seven weeks with the U.S. Women’s Open July 9-12 and the Ricoh Women’s British Open July 30-Aug. 2. The year’s final major is the Evian Championship, scheduled Sept. 10-13.

“Just take a lot of positives from it, knowing that I can pull off a round on Sunday here at the KPMG Women's PGA Championship,” Thompson said. “It means a lot, and I'm going to take a lot of confidence going into my upcoming tournaments.”

Gal got some more Solheim Cup momentum as she seeks to make the European team. The Solheim Cup is scheduled to be played in her native Germany Sept. 18-20.