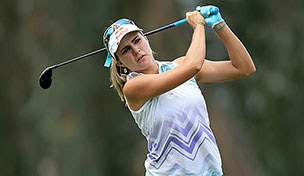 Getty Images
FARMINGDALE, NY - AUGUST 25: Rory McIlroy of Northern Ireland plays his third shot on the 18th hole during the first round of The Barclays in the PGA Tour FedExCup Play-Offs on the Black Course at Bethpage State Park on August 25, 2016 in Farmongdale, New York. (Photo by David Cannon/Getty Images)  -

Lexi Thompson is in search of her first major title, but she put herself in position halfway through the Kraft Nabisco Championship after a sizzling 64. Here's how things look after two rounds in Rancho Mirage, where the 19-year-old shares the lead with Se Ri Pak:

What it means: Thompson took the Dinah Shore Tournament Course by storm Friday, and after opening with a 73 she now shares the lead at the mid-way point with Pak, who won the first of her five major titles 16 years ago. The leaderboard has no shortage of storylines, though, as Wie remains just one shot back and Kerr, a former world No. 1 is just two shots off the pace.

Round of the day: Thompson began slowly, carding five straight pars, but then quickly caught fire. She birdied six of her next eight holes to move up the leaderboard, then closed the round with two more birdies across her final three holes. She failed to drop a shot, and while her score was two off the course record, it does stand as the lowest second-round score in the event's illustrious history.

Best of the rest: Gerina Piller appeared headed for an early exit after opening with a 5-over 77, but the Solheim Cup veteran rebounded in impressive fashion, carding a 7-under 65 to move inside the top 15. Piller's round, like Thompson's, was bogey-free, and she birdied three of the four par-5s in Rancho Mirage. At 2 under, she heads into the weekend tied for 11th, five shots off the pace.

Biggest disappointment: Yani Tseng won this event in 2010 during a stretch of nearly unparalleled dominance over the women's game, but the former world No. 1 has lost her form of late and stumbled once again this week. Tseng carded rounds of 75 and 76, making only four total birdies, and missed the cut by two shots.

Main storyline heading into Saturday: All eyes will be on Thompson as she looks to back up her stellar second-round effort, though Pak certainly can't be overlooked as she vies for a major title that has eluded her over the years. Wie remains in contention after a 1-under 71 and the leaderboard is a stacked one, with six former major champions currently in the top eight.

Quote of the day: "This is one of my goals, to win a major this year." - Thompson