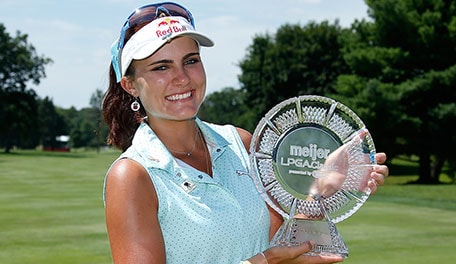 Lexi Thompson made a bold, early charge Sunday and then hung on to win the Meijer LPGA Classic at Blythefield Country Club in Grand Rapids, Mich.

Four shots behind Lizette Salas at day’s start, Thompson birdied seven of the first 11 holes to take command. With a 6-under-par 65, she beat Salas (70) and Gerina Piller (64) by one shot. At 20, Thompson now has five LPGA titles.

“I knew I had to make a lot of birdies,” Thompson said. “It was nice to start off with one.”

Thompson is projected to jump from No. 13 in the Rolex Women’s World Rankings to No. 6.

The victory gives Thompson momentum going to next week’s Ricoh Women’s British Open at Trump Turnberry in Scotland. Thompson broke through to win her first major last year at the Kraft Nabisco Championship. The Women’s British Open has been the most challenging major so far in her young career. It’s the only major she doesn’t have a top-10 finish in, but it’s also the major she has played the fewest times. In three starts, her record is T-17, MC, T-54.

“It’s definitely momentum going into the next week,” Thompson said. “But the British Open is totally different golf than golf here. It's a lot different shots and a lot more thought process into them.”

Thompson caught Salas early Sunday and then had to hold her and Piller off in the end. Three shots up with two holes to play, Thompson saw her lead shrink to one after she missed a 4-footer for par at the 17th. She made bogey there with Salas making birdie and Piller making birdie up ahead at the 18th.

After Thompson pushed her drive right and into the rough at the 18th with a child sneezing in her back swing, she recovered nicely. She slashed her approach to 25 feet and two putted for a final par. With Salas missing a 40-footer for birdie to tie, Thompson needed only a tap in for the win.

“Just didn’t come off to the start I wanted,” Salas said. “I knew there would be some birdies out there ... Just hit some errant tee shots that caused some bogeys, but I didn’t give up.”