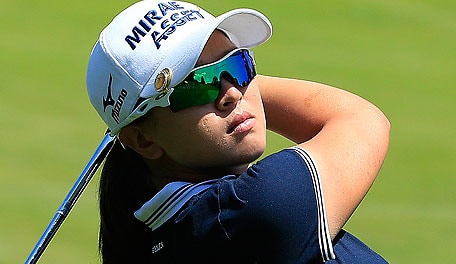 HARRISON, N.Y. – Sei Young Kim couldn’t catch Inbee Park in the final round of the KPMG Women’s PGA Championship on Sunday, but she positioned herself well to make a historic run at trying to win the Rolex Player of the Year and Rolex Rookie of the Year awards.

Nancy Lopez is the only player in LPGA history to sweep both awards. She did it in 1978.

Kim started Sunday two shots behind Park and moved within a shot with a birdie at the eighth hole, but she faltered at the ninth, making a four-putt double bogey to fall four shots back. She three-putted from 4 feet.

“That’s when everything kind of fell apart,” Kim said.

She ended up shooting a 2-under-par 71 and losing by five shots. Kim, a 22-year-old rookie with two LPGA titles this year, has been a factor in the first two majors of the year, though they haven’t ended the way she wanted them to end. She took a three-shot lead into the final round of the ANA Inspiration in April and shot 75.

“I’m in in the right place right now, but I believe that with my ability, I could be better,” Kim said. “I will try hard to get close to No. 1.”