Tiger, Phil among stars to misfire early at Honda 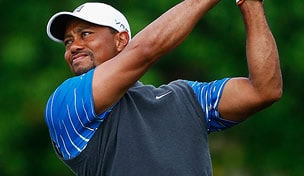 Getty Images
On the sixth hole of the final round of the Abu Dhabi Championship, Martin Kaymer had a 10-stroke lead and looked like a lock for his fourth win at the event. But the two-time major champion dropped six shots in seven holes around the turn, and eventually coughed up his lead, losing to 357th-ranked Frenchman Gary Stal. Kaymer summed up the collapse with, "I don't know how to put it into words." (Getty Images)  -

PALM BEACH GARDENS, Fla. – This week’s Honda Classic boasted the strongest stroke-play field to date, with seven of the top nine players in the world teeing it up at PGA National.

So far, the only star who has showed up is Rory McIlroy. The world No. 8 leads through two rounds at 11-under 129.

Tiger Woods is 11 back heading into the weekend. World No. 2 Adam Scott is making his first start in six weeks and has looked rusty, mustering only a 3-under total despite lift, clean and place conditions.

Hey, that’s better than Henrik Stenson (9 over) and Phil Mickelson (1 over). They both got a head start on their preparations for next week’s World Golf Championships event.

As for the rest of the OWGR top 10, Zach Johnson shot even par on Day 2 and is eight shots behind, while Sergio Garcia made the cut on the number.