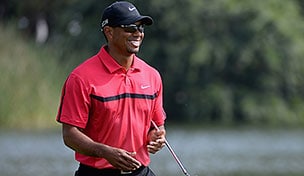 Tiger Woods announced his upcoming schedule on his website Thursday – and, as expected, it doesn’t include the WGC-Accenture Match Play Championship.

Woods said on his website that he will play the Honda Classic, near his Jupiter, Fla., home, then defend titles at Doral and Bay Hill.

Woods said he had planned to take Match Play week off (Feb. 19-23) and travel with girlfriend Lindsey Vonn to the Winter Olympics, “but unfortunately that won’t happen. Instead, I’ll stay home and prepare for the Florida tournaments.”

That means three of the top four ranked players in the world – Woods, Adam Scott and Phil Mickelson – will skip the first World Golf Championships event of the year.

Since the Match Play moved to Dove Mountain, in 2009, Woods has not advanced past the second round.

“The Honda Classic is close to my home, and I want to support it whenever I can,” said Woods, who will miss the Match Play for just the second time since 2002. “I’m also excited about spending time with Arnold and defending my title at his tournament and the WGC-Cadillac. I’m looking forward to seeing what they’ve done at Doral.”

Woods is off to his worst-ever start as a pro, finishing T-80 at Torrey Pines and T-41 at the Dubai Desert Classic.