Tiger wraps up 76, readies for Round 2 at Doral 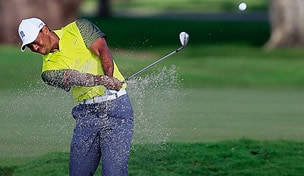 DORAL, Fla. – It will be another quick turnaround for Tiger Woods at the WGC-Cadillac Championship, which may be a blessing in disguise.

The world No. 1 finished his weather-delayed first round at Doral Friday morning, starting on the 11th hole, which he bogeyed. He would play his first four holes on Friday in 4 over par but bounced back with birdies at Nos. 15, 16 and 17.

The momentum was stalled, however, when Woods’ drive at the par-4 18th drifted left and found the water hazard. His closing bogey left him at 4-over 76 (his highest card in 40 career rounds at Doral) and tied for 53rd. There are 68 players in the limited field.

Woods will get another crack at those same holes in a little over an hour and is scheduled to tee off from the 10th hole at 11:44 a.m. ET.

Woods’ ailing back, which prompted him to withdraw from the Honda Classic last Sunday, didn’t appear to be the issue on a windswept Friday considering that his group – which included the world’s Nos. 1, 2 (Adam Scott) and 3 (Henrik Stenson) – played their last eight holes of Round 1 in a combined 8 over.

Woods did not talk to the media after the first round.