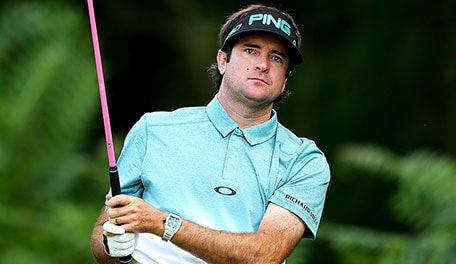 WHITE SULPHUR SPRINGS, W. Va. – Bubba Watson is excited to be playing a de facto home game this week at The Greenbrier Classic, even if his energy level is far from ideal.

Watson earned his second victory of the season last week, beating Paul Casey in a playoff at the Travelers Championship. He has had little time to rest on those laurels, however, and Watson played only three holes of his Tuesday practice round before calling it quits and heading home to rest.

“That much pressure, that much energy spent trying to get into the playoff, stay in the playoff, and then trying to produce in the playoff, I’m tired and worn out,” Watson said. “Mentally the energy level is just not there. So hopefully resting, drinking fluids, and hopefully (I can) recover a little bit.”

It’s a family-focused week for Watson, who has a home just off the Slammer Course at The Greenbrier. He bought his wife Angie a spot alongside him in the pro-am as a gift, and the two were joined Wednesday by NBA coach Mike D’Antoni and NFL coach Sean Payton.

“I asked if they had pro-am spots available about a month ago, and they said yes, so I bought her a pro-am spot. Told her at the U.S. Open. So she was excited,” Watson said. “It’s really fun being able to do that, you know, with a family member.”

Watson has long contended that his career goal is 10 PGA Tour wins, and his victory at TPC River Highlands was No. 8. While he once viewed that goal as “unreachable,” at age 36 he remains focused on reaching double-digit wins before adjusting his sights.

“I haven’t got to my first goal yet,” he said. “There is no reason to start setting another goal if you haven’t reached your first goal. That’s the way I see it. I am two away from winning that. Somehow if it’s possible to hold a trophy for the 10th time, then yes, I’ll change my goals to 15 (wins) or whatever.”