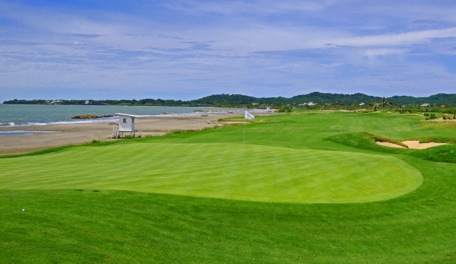 CARTAGENA, Colombia - Hoping to capitalize on what could be an expanding market in South America, the PGA Tour officially opened its 33rd Tournament Players Club over the weekend with the grand opening of the TPC Cartagena at Karibana.

In addition to bringing the 2-year-old Karibana Resort course into the TPC family, the PGA Tour also announced that the Jack Nicklaus-designed layout will play host to a new Web.com Tour event early next year. The Karibana Championship, which will offer a $700,000 purse, will be played March 5-8 as part of the Tour's early season launch in Latin America. It will be the second Web.com Tour event in Colombia. In February, Alex Cejka won the Pacific Rubiales Colombia Championship in Bogota.

The addition of TPC Cartagena, located on the northern coast of Colombia on the Caribbean Sea, marks the second TPC course in Latin America and first in South America. The timing gives golf a boost in South America, especially in light of the recent obstacles in the building of the new 2016 Olympic course in Rio de Janeiro, Brazil. The Gil Hanse-designed Olympic Course has run into multiple roadblocks from political, business and environmental groups. Organizers still hold out hope, however, that the course will be ready sometime next year for a test run before golf returns to the Olympics for the first time in more than a century.

But while Cartagena and Rio are several thousand miles apart, both TPC and resort officials are banking on growing enthusiasm for the game in South America over the next decade and think that the Olympics will put golf in the spotlight for the region.

"The PGA Tour has viewed South America as an important part of a larger picture," said Jim Triola, COO of golf course properties for the TPC Network. "Post-Rio, I think there will be a revolution, hopefully over time. I think it will expand in two years. It may not be at an explosive pace. It will probably take a little time."

There were two other reasons that the TPC Network has been looking at Karibana the last couple of years: its location and the resort itself.

Located about a half hour from Rafael Nunez International Airport, Karibana is Colombia's first luxury resort and real estate development. It offers a beach club, spa services, exceptional dining, tennis and luxury apartments. Construction will begin soon on a luxury hotel that will be managed by Hilton. The hotel will include a 1,000-person convention center, meeting rooms, spa and rooftop pool. Guests will have access to all resort amenities, including the golf course, which opened in 2012.

The golf course, which plays 7,074 yards from the tips, should provide a good test for the Web.com players. With four sets of tees and wide fairways, it doesn't beat up resort guests, unless the wind is blowing. There's an abundance of water hazards, including the ocean that runs along the last three holes. Additionally, plenty of bunkers and subtle greens on this all-paspalum course should keep scoring in check.