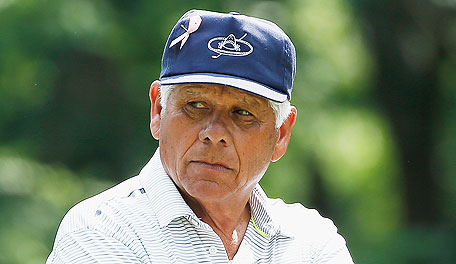 WHITE SULPHUR SPRINGS, W. Va. – Lee Trevino believes he has identified the source of American struggles at the Ryder Cup – and it starts at the top.

Trevino, a six-time major champion and former Ryder Cup captain, is the newest pro emeritus at The Greenbrier. He happens to be replacing the man who unsuccessfully captained the Americans last fall at Gleneagles – Tom Watson.

Speaking in advance of this week’s Greenbrier Classic, Trevino offered a frank analysis of what has gone wrong for the U.S. in recent competitions, where the Americans have gone 1-6 since 2002.

“Let me tell you what the problem is with the Ryder Cup,” Trevino said. “It’s real simple. Any time you take a Ryder Cup team to the Ryder Cup, you got three guns. These are your big guns. Who are they? You pick your three guns, and when these three guns play for the week, they have got to give you a +6 (points).”

Last year’s top point-earners in qualification for the U.S. team were Bubba Watson, Rickie Fowler and Jim Furyk. That trio combined to go 1-8-3 in Scotland, where the Americans fell 16 ½ to 11 ½. The only players to win more than one match were Phil Mickelson (2-1) and Ryder Cup rookies Jordan Spieth (2-1-1) and Patrick Reed (3-0-1).

According to Trevino, the recent performance of America’s star players is a big reason why the event, once dominated by the U.S., now seemingly belongs to Team Europe.

“If you look at the last Ryder Cups that we’ve lost and check the records of the (top) guys…none of them have a winning record.”

With the biennial event shifting to Hazeltine National in Chaska, Minn., next fall, Trevino doesn’t believe the outcome will change unless the strategy shifts, pointing out that while the competition is constantly on the minds of European leaders, the Americans “start talking about it when we get fitted for the pants a month before.”

“It’s not going to get any better. The next Ryder Cup, if they play again, it’ll be exactly the same,” he said. “Your three top dogs have got to give you plus (points) in that week.”