Trump fires back at Whan, says Women's British could move 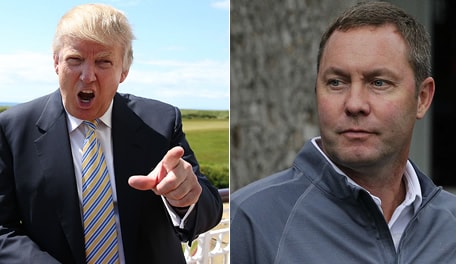 Donald Trump is firing back at LPGA commissioner Mike Whan after the tour issued a statement last week suggesting it would prefer the Ricoh Women’s British Open be played somewhere other than Trump Turnberry but that it was too late to make such a move with the event a little more than two weeks away.

The LPGA statement was a reaction to Trump’s controversial remarks about Mexico and illegal immigration.

In a letter from Trump to Whan, dated July 13, Trump takes the commissioner to task for his “nasty statement,” accuses him of lacking “common decency,” and provocatively offers to allow him to move the Women’s British Open to a new site on short notice despite “an absolutely binding contract.”

In the letter, obtained by Golf Channel’s Matt Ginella, Trump describes his devotion to the LPGA and its players while laying out his disappointment in Whan’s assertion that playing Trump’s course does not signify support for Trump’s stand on immigration.

Trump wrote: “You never called to tell me this, as common decency would have dictated, but rather just put it out to the media. As you have heard, and as Univision and NBC are finding out, I am a ‘plus 5 (handicap)’ at contracts. You have an absolutely binding contract to play the great Turnberry Alisa course, but based on your rude comment to the press, please let this letter serve to represent that, subject to a conversation with me on the details, I would be willing to let you play the Women’s British Open, in two weeks, at another course rather than magnificent Turnberry (which I own). I think you have done an extraordinary disservice to women’s golf, but in no way will that diminish my respect for the women on the LPGA tour or their great golfing talent.

“Please contact me at your earliest convenience to discuss my releasing the LPGA from its obligations under the contract. Obviously, you will have to move quickly.”

An LPGA official, contacted Tuesday morning by GolfChannel.com, said “at this point there is no official response.”

The Ricoh Women’s British Open is conducted by Great Britain’s Ladies Golf Union and co-sanctioned by the LPGA and the Ladies European Tour. Those governing bodies work closely together along with IMG’s tournament operations staff in the presentation of the event. Any decision to move the Women’s British Open would require agreement by the LGU, LPGA and LET.

Below is the full letter: