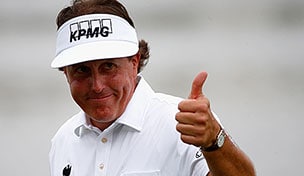 Getty Images
LAHAINA, HI - JANUARY 10: Jordan Spieth plays his shot from the 18th tee during the final round of the Hyundai Tournament of Champions at the Plantation Course at Kapalua Golf Club on January 10, 2016 in Lahaina, Hawaii. (Photo by Tom Pennington/Getty Images)  -

PALM BEACH GARDENS, Fla. – Rare is the player who sees a regular PGA Tour stop for the first time at age 43.

That’s Phil Mickelson’s challenge this week at the Honda Classic.

Perhaps not surprisingly, Lefty eased into his first competitive round on PGA National’s Champion Course with an even-par 70 that left him seven shots off the lead. He mixed two birdies with a double bogey in his first start at the Honda since 2002.

“I’m a little uncertain at times where I want to go because I’m not as familiar with the course,” he said afterward, “but you should be able to pick that up quickly with the yardage books and I’ve got a great caddie. So those things are not as important as the execution, hitting the right shot and pulling it off.”

Mickelson was making his first start after a three-week break, and he said he needed to improve his distance control with his irons, particularly when the wind gusts. His lone birdies came on the par-5 third and the par-4 10th, where he knocked his approach to 8 feet. He double-bogeyed the par-3 seventh, after hitting his tee ball way left of the green.

“I really like this golf course,” he said. “I think it’s a wonderful test of golf. I think it’s a very difficult, hard golf course but when you hit good shots, you get rewarded with birdies opportunities.”

Mickelson, No. 5 in the world, is coming off his worst West Coast swing as a pro, after he failed to finish better than 19th in three starts.