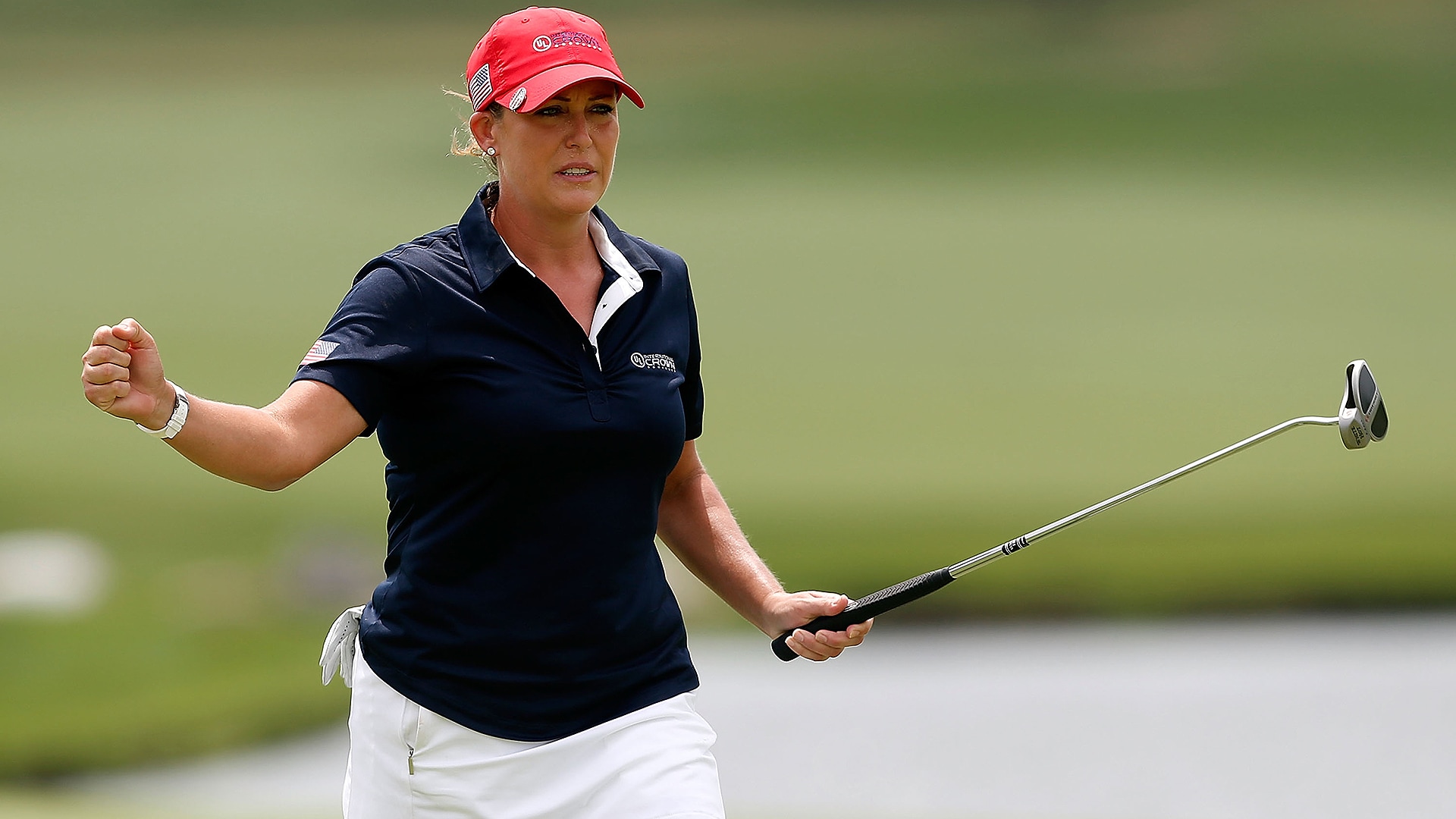 Thanks to Cristie Kerr’s 3-and-2 victory over England’s Mel Reid, the United States team of Kerr, Lexi Thompson, Stacy Lewis and Gerina Piller won the International Crown on Sunday.

Kerr closed out Reid on the 16th hole when Reid’s birdie try from the fringe that would have extended the match raced past the hole.

Unaware of the importance of the match, Kerr found out she had clinched the title when Lewis and Piller ran onto the green to congratulate her.

The win gives the U.S. its first International Crown after the Americans were shut out of Sunday Singles two years ago in the event’s inaugural playing.

Lewis defeated Japan’s Mika Miyazato, 3 and 2, in the second match off on Sunday, while Piller took down Chinese Taipei’s Yani Tseng, 4 and 3, in the match behind.

Shortly after Kerr’s win, Lexi Thompson was closed out by runner-up South Korea’s So Yeon Ryu, 2 and 1, but it didn’t matter.

“Gerina and I went out and got points early, and we got Kerr into the house. Now we’ve got a crown,” Lewis said, summing up the victory.

*China, Thailand and Australia failed to advance to Sunday singles.

Kung completed a brilliant week, going undefeated. With her singles victory, she finished the event with a 3-0-1 record.

The match was all square going to the 13th, where Lewis stuck her approach to 4 feet to set up birdie. She carved her tee shot to 8 feet at the 14th and made another birdie to go 2 up, and then hit her approach at the 15th to a foot for a third consecutive birdie to go 3 up.

Piller birdied the first and never trailed the entire match, with Tseng hitting too many wayward shots, one behind a tree and another in the water on the front nine. Stepping to the 12th tee 1 up, Piller won three consecutive holes to put the match away.

Nomura birdied the sixth, seventh and ninth holes to win all three holes and turn the match in her favor.

Clyburn holed a 6-foot birdie at the 17th to move 1 down, but Watanabe got up and down from behind the 18th green, holing an 8-foot putt for par to secure her victory.

Lu got up early on Chun, making four birdies over the first five holes to take an early 3-up lead. She didn’t back off, never really giving Chun an opening.

Trailing almost the entire match, Shadoff made back-to-back birdies at the 14th and 15th holes to turn momentum in her favor. She completed a terrific week, going 3-0-1.

Thompson was 1 down when she reached the par-5 eighth hole in two but then needed three putts, missing a 3-footer for birdie. It gave Ryu a 2-up lead and momentum. Ryu hit a hybrid to 4 feet at the ninth to make birdie and build a 3 up lead and held on from there.

Kerr took control early, opening with a birdie to win the first hole and then a 40-foot eagle putt at the third to go 2 up. Kerr won four of the first five holes and then held off Reid’s push on the back nine, clinching the victory with a two-putt birdie at the 16th.

Kim birdied four of the first six holes to go 3 up. Hull, who came into Sunday having won more holes (10) than any other player despite missing Friday fourballs due to illness, won just one hole the rest of the way against Kim.