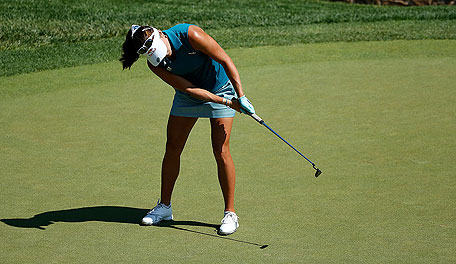 LANCASTER, Pa. – What’s up with the slow greens at the U.S. Women’s Open?

“It’s hard to think you have to smash the putts at a U.S. Open,” two-time U.S. Women’s Open winner Inbee Park said after Friday’s round. “Putts are really, really slow. You can’t hit it hard enough to get there.”

Morgan Pressel was shouting at her ball when it came up short on the 17th hole Friday.

“It doesn't matter how many times you tell yourself to give it a good whack, it still came up short,” Pressel said.

Don’t worry. They’re quickening up Saturday. Danielle Kang was in the second group off in the third round and can vouch for that.

“The greens are rolling now the way you thought they were going to,” Kang said. “They’re faster.”

So why the slow greens the first two rounds?

U.S. Women’s Open championship director Ben Kimball told GolfChannel.com Saturday morning that it was due to a combination of factors. The most significant one was all the rain the area has received, including a downpour that halted the first round and softened the greens. Kimball said the maintenance staff double cut and rolled the greens Friday morning just before resumption of the first round, but staff was unable to get back out to do more work before the second round, other than move the hole locations.

Kimball said the USGA was seeking to set the green speeds this week at 11.5 on the stimpmeter, not overly fast because of the nature of all the pitch, swales and movement on architect William Flynn’s greens. He said the green speeds Friday probably got to only about 10.5 or a little higher.

“Trust me, we would have liked to have gotten them up to the speed we wanted, but we really couldn’t,” Kimball said. “You lose a little bit when you get a half-inch of rain like that.”

Kimball said the pitched nature of the Lancaster Country Club greens makes green speed deceptive. While players might have been frustrated leaving uphill or relatively flat putts short, they needed manageable green speeds to make all the short 4- and 5-foot putts that have significantly hard breaks to them, more break than most short putts on most courses. Also, there are limited hole locations on certain greens. If the greens are too quick, those locations become questionable. 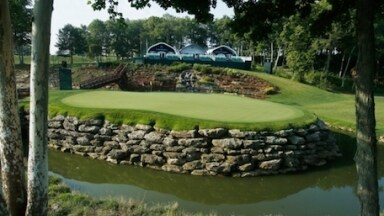 Redesigned greens at Valhalla will make it tough to read putts for the contestants at the PGA Championship. How can you improve your green-reading skills?