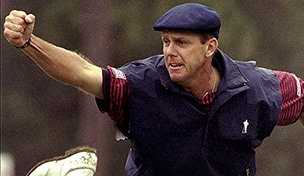 Getty Images
RANCHO MIRAGE, CA - APRIL 04: Amatuer Haley Moore walks past the Dinah Shore Statue prior to walking across the bridge over Poppy's Pond at the 18th greeb in the ANA Inspiration Round Three at Mission Hills Country Club on April 4, 2015 in Rancho Mirage, California. (Photo by Kent C. Horner/Getty Images for ANA)  -

Fifteen years after his second U.S. Open win created one of golf's most iconic moments, Payne Stewart was posthumously named as the 2014 recipient of the Bob Jones Award, the "highest honor" given by the USGA.

A three-time major winner, Stewart won the U.S. Open in 1991 and 1999 with the latter title coming at Pinehurst No. 2, site of this year's second major. He died in a plane crash in October 1999 at age 42, just four months after that victory.

The award is given annually by the USGA to recognize "an individual who demonstrates the spirit, personal character and respect for the game" of Jones, who won the U.S. Open four times as an amateur. Past recipients include Arnold Palmer (1961), Jack Nicklaus (1975), Ben Hogan (1976), Annika Sorenstam (2012) and Davis Love III (2013).

Standing in front of a statue at Pinehurst that commemorates Stewart's final putt in 1999, incoming USGA president Thomas O'Toole explained that a public ceremony will be held during U.S. Open week this summer during which the award will be presented to the former champion's family.

"Payne's legacy continues to shine as an inspiration to players of all ages," said O'Toole. "His spirit and gracious attitude left an indelible mark on everyone who surrounded him."

Stewart's widow, Tracey, will attend the ceremony and accept the award on his behalf along with their children, Chelsea and Aaron.

“We are so pleased, and know that Payne would be extremely honored and humbled to be recognized with the prestigious Bob Jones Award,” she explained. “Payne loved the game of golf and sought to live out and promote the same principles of high character, sportsmanship and passion that Bob Jones embodied.”