USGA not backing down after booting caddie 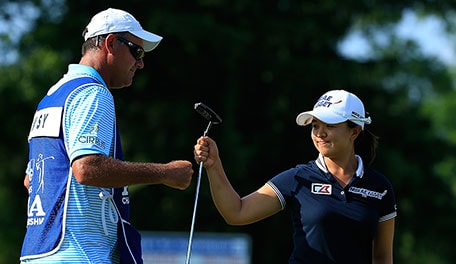 LANCASTER, Pa. – The USGA isn’t backing down on its decision to remove caddie Paul Fusco from the U.S. Women’s Open.

A day after USGA officials said they discovered Fusco in the rules office improperly taking cell phone photos of “internal course setup documents” and banished him from the competition, championship chairman Diana Murphy was asked about the decision in the association’s annual U.S. Women’s Open news conference.

Fusco, Sei Young Kim’s regular caddie, was taking photos from documents that included hole locations, yardages, alternate tee boxes and even forecasted wind directions for each of the four rounds, according to the USGA. Setup information for a specific round isn’t released to players and caddies until the morning of that round.

Caddie kicked out of U.S. Women's Open over photos

“As you know, golf is a game of honor and integrity,” Murphy said. “Unfortunately, we found a caddie who was attempting to get some information that would benefit his player and not the whole field. And there was just no question in our minds that we needed to prevent that from happening to protect the total field this week. So it was terribly poor judgment on his part.”

Caddies have been mixed in their reaction the news. The British newspaper The Guardian quoted a fellow caddie who was “disgusted” that the USGA sent security onto the range to remove Fusco in front of Kim and other players and caddies.

“I've seen some reports that are not accurate in how we handled it,” Murphy said. “We certainly took the time to explain it to the player and to make sure she understood why this was a violation of our policy, why the caddie wasn't allowed in the rules trailer to begin with, certainly not allowed to take pictures of the information that he was taking pictures of for he and his player's benefit. And expedited his exit from the course, and the player was able to find a replacement caddie quite quickly.”

Fusco told GolfChannel.com that there’s more to the story, but out respect for Sei Young Kim’s bid to win the U.S. Women’s Open he was reserving comment until the championship was over.