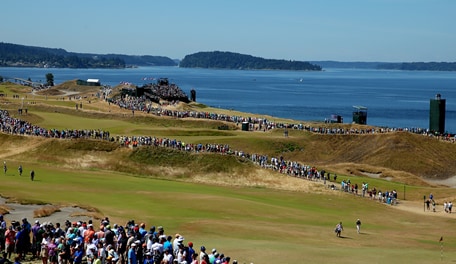 LANCASTER, Pa. – After time to review and reflect, USGA executive director Mike Davis says he has two regrets about how the U.S. Open was conducted at Chambers Bay three weeks ago.

In the end, though, Davis believes a positive lasting memory of Chambers Bay will win out.

“We had an exciting finish, a great player win it, a great leaderboard, and that is what really does matter,” Davis said at the U.S. Women’s Open. “We were pleased about the ending.”

The ending may end up overshadowing all the spectator and player complaints.

About the spectators, Davis said the USGA would have liked to have improved the viewing experience with better ways to move people around the course.

About the player issues with bumpy greens ...

“In some ways that took away from part of the championship,” Davis said. “It was so radically different architecturally. It was a great test of golf. I do think if we hadn’t had the bumpy green situation, my sense is you would have had more of the players say ‘It’s a different test, but it’s a good test.’ I didn’t hear many comments negatively about the setup. It was more the bumpy greens we got. Some of the players maybe didn’t like how the course was routed up the side of the hill, but that’s a subjective thing.”

Davis said the Chambers Bay greens putted beautifully at the 2010 U.S. Amateur when they were all fescue. He said the USGA was challenged with winter issues leading into spring issues and the growth of a thick-bladed annual poa annua.

“We did everything we could,” Davis said. “My own sense is if we probably had talked a little more openly with players beforehand, maybe the chatter wouldn’t have been too bad. That’s one I thought about: Could we have done a better job in that respect? I think we did all we could with what we were dealt with. Maybe just communication with players, I could have handled a little differently ...

“We made a comment that the greens probably don’t putt as bad as they look. That got translated into ‘We think the greens are fine.’ I don’t think we ever meant that, but, in fairness, I think what happened with the players is they were put in position where ‘You’re making us argue against what you said,’ and that created an awkward position for them. To an extent, we did that.”