Mickelson to play Valero for first time since 1992 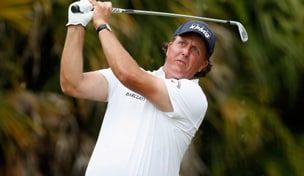 Getty Images
ORLANDO, FL - MARCH 20: Jason Day of Australia poses with his wife Ellie and children Dash and Lucy following the final round of the Arnold Palmer Invitational Presented by MasterCard at Bay Hill Club and Lodge on March 20, 2016 in Orlando, Florida. (Photo by Sam Greenwood/Getty Images)  -

Last year it was Rory McIlroy. This year, Phil Mickelson.

Tournament officials for the Valero Texas Open announced Wednesday that Mickelson will play in next week's tournament at TPC San Antonio.

Lefty skipped Bay Hill but will go back-to-back in Texas before teeing it up at the Masters. The 43-year-old has had an uneven start to his 2014 PGA Tour season, with a missed cut, withdrawal and no finish better than 16th.

Mickelson hasn’t played the Texas Open since his rookie year in 1992. He tied for 47th that year at Oaks Hills Country Club.

Adding Mickelson to the mix is a huge get for the tournament, which already has commitments from Jimmy Walker, Sergio Garcia, Matt Kuchar and Jim Furyk.

Last year, McIlroy made an 11th-hour decision to add the San Antonio event, which was played the week before the Masters.