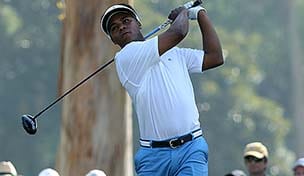 LOS ANGELES – Harold Varner III’s short swing is generating some of the longest drives at Riviera Country Club this week.

In fact, it generated the longest drives in the first round at the Northern Trust Open. With Friday morning’s completion of the suspended opening round, Varner’s name topped the field in average distance for all drives. At 303.6 yards per pop, Varner was longer than Bubba Watson, Dustin Johnson, Nicolas Colsaerts, J.B. Holmes and Jimmy Walker.

Varner, playing on the event’s special diversity exemption, opened with a 2-under-par 69, good for a tie for 18th. He is the only black man in the field. He is teeing it up in just his second PGA Tour event after missing the cut at the U.S. Open last year.

“It’s a very compact swing, a very simple swing,” said Bruce Sudderth, Varner’s swing coach. “There aren’t a lot of things that can go wrong with it.”

“He isn’t very big, but he’s very, very powerful,” Sudderth said. “He creates so much speed.”

Varner is the sixth recipient of the Northern Trust special diversity exemption. Jeremiah Wooding made the cut last year, the first of the recipients to do so.