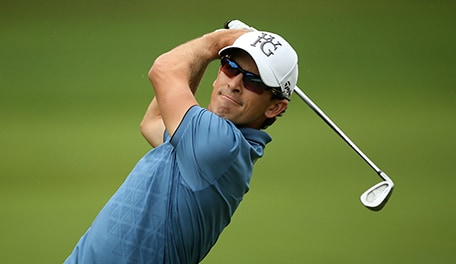 Scott Langley and Jhonattan Vegas sit atop a crowded leaderboard through 36 holes at The Greenbrier Classic. Here’s how things played out during another wet day at the Old White TPC:

What it means: Despite the soft conditions and some low scores, the lead advanced just one shot from Thursday’s mark of 8 under. Langley, the overnight leader after an opening 62, needed a scrambling par on his final hole to shoot 1-under 69. He is in search of his first career victory, while Vegas is trying to breakthrough for the first time since his maiden win at the Bob Hope in 2011. Those two are closely followed by seven players just one shot back and a total 37 players within four shots. The entire remaining field is within seven strokes of the lead.

Round of the day: Molder and Hearn are part of the logjam at 8 under thanks to rounds of 6-under 64. Both made seven birdies against a single bogey. Hearn, who started on the back, played his opening nine in 6-under 30 before making seven pars, a birdie and a bogey during an even-par inward half.

Best of the rest: Six players – Vegas, S.J. Park, Patrick Rodgers, Seung-Yul Noh, Mark Hubbard and Michael Putnam – turned in 5-under 65. Putnam’s round got him inside the cut on the number following an opening 73.

Biggest disappointment: Defending champion Angel Cabrera won’t be around to defend his title after missing the 2-under cut with rounds of 71-72. Jonas Blixt, who won this event in 2013, missed by one shot at 1 under. Other notables leaving The Greenbrier early include Steve Stricker (-1), Bill Haas (E), Erik Compton (+2) and Webb Simpson (+3).

Shot of the day: David Bradshaw very nearly won the fans around the 18th green $1,000 each with an almost-ace from 178 yards. Bradshaw’s ball landed short of the hole, bounced twice, lipped out and came to rest 21 inches from the hole.

Main storyline headed into the weekend: Tiger Woods, thanks to rounds of 66-69, enters the weekend four shots back and tied for 25th at 5 under. Woods, now down to 220th in the Official World Golf Rankings, is in search of his first win since the 2013 WGC-Bridgestone and his first top-10 since the 2013 Barclays.