With This Victory: Creamer cashes in on recent form 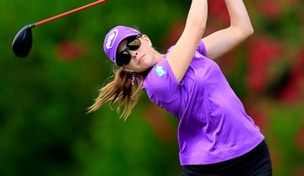 Getty Images
PARADISE ISLAND, BAHAMAS - FEBRUARY 08: Stacy Lewis reacts to a shot during the final round of the Pure Silk Bahamas LPGA Classic at the Ocean Club course on February 8, 2015 in Paradise Island, Bahamas. (Photo by Tom Pennington/Getty Images)  -

Here are a few stats and figures about the victory, her 10th on the LPGA circuit:

• Historically, Creamer has played well in Singapore. She had a pair of third-place finishes in 2008 and 2013 and shared third in 2009.

• Creamer is projected to move from No. 11 to No. 8 in the Rolex World Rankings.

• The victory in Singapore was her third top-3 finish of the 2014 season, following T-3s at both the Women’s Australian Open and Pure Silk-Bahamas LPGA Classic.

• Last year, Creamer made the cut in all of her 23 starts, earning $831,918. She had six top 10s, including four finishes inside the top 5. Her best finish was a runner-up at the Marathon Classic.