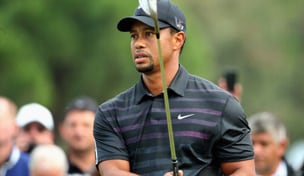 Getty Images
Nicolas Colsaerts of Belgium poses with the birthday cake he received from The European Tour during the first round of the DP World Tour Championship, Dubai on the Earth Course at Jumeirah Golf Estates on November 14, 2013 in Dubai, United Arab Emirates. (Photo by Andrew Redington/Getty Images)  -

CNN’s Rachel Nichols tracked down Tiger Woods for a one-on-one interview in Turkey.

In the 7-minute interview, Woods discussed everything from his major drought to his children to the fitness of his fellow Tour players to girlfriend Lindsey Vonn.

You can watch the video here, but these are the highlights:

• On what has been the most gratifying part of his return to No. 1: “Going through and battling the injuries that I had, and to now finally come out on the other side, where I feel more consistent. I’ve won eight times in the last two years. I’m very, very proud of that.”

• On his major drought: “It’s frustrating, because I had a chance in two of them (this year). I’ve been there with chances to win on the weekend, I just haven’t won yet.”

• On what kind of father he is at his kids’ sporting events: “I don’t yell when they play T-ball or soccer. I just watch, support. I’ve been lately the watermelon guy. They need a little bit of sugar, getting a little tired, they’ll come over and I give them watermelon. I just watch, and that’s just a thrill.”

• On comparing his fitness to Vonn's: “It’s two totally different training regimens. If you look at some of the guys on Tour, they’ve got huge guts and can’t breathe when they’re going up to tee boxes, but they can still win golf tournaments. In her sport, if she’s not feeling close to 100 percent, you’re not going to win.”

• On whether Vonn’s claim that Woods is “dorky-goofy” is fair: “Uh, I guess so. My teammates used to call me Urkel back in college. Yeah, I do have that little nerdy of side of me. That’s probably why I got into Stanford.”