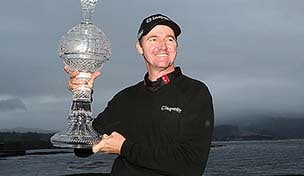 Getty Images
Billy Horschel and his caddie, Micah Fugitt, react to his second shot on the 15th hole during the first round of The Memorial Tournament presented by Nationwide at Muirfield Village Golf Club on June 4, 2015 in Dublin, Ohio. (Photo by Sam Greenwood/Getty Images)  -

On Sunday at Pebble Beach, the 35-year-old Texan – who just five months ago was winless on the PGA Tour – earned his third title in eight starts during this new 2013-14 wraparound season.

Walker is just the fourth player in the past 20 years to win three events in eight or fewer starts to a season.

Woods, of course, has accomplished the feat five times, most recently in 2013, when he won three of his first five starts. Mickelson won three times in eight starts in 2005, while Duval, the former world No. 1, had three wins in his first seven appearances (and four of his first eight) in 1999.

What’s more, with the victory Sunday, Walker also joined this elite list of players who have won three-plus events in a season in the past decade: Woods, Mickelson, Vijay Singh, Rory Mcllroy, Steve Stricker and Kenny Perry.

Walker is the most improbable.

Since 1970, only five players have won three-plus times in a season after previously being winless: