Watson on 'the end' to his Opens, Phil's 'sour grapes' 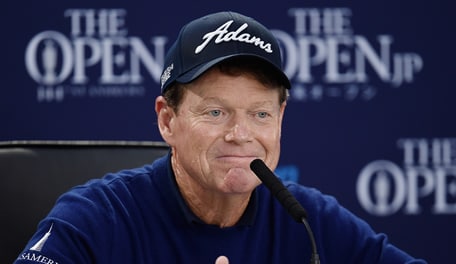 ST. ANDREWS, Scotland – Tom Watson doesn’t really do melancholy much. It’s too pensive an emotion. He prefers things on the surface, plain, where everyone understands each other. Ask him why he lost the 1984 Open at St. Andrews after hitting it on to the road at the 17th hole, he will say “I just hit a terrible shot.” Ask him why next year’s Masters will be his last, he will say, “The golf course is too big for me.”

Ask him about Phil Mickelson’s harsh words about him after last year’s Ryder Cup, he will say: “Disappointing. Phil was very disappointed about not being able to play. It was kind of sour grapes. That’s understandable, we just got waxed, the whole team, and the disappointment was just there. We let our hearts talk for us.”

This is Watson’s Midwestern way – direct, unadorned, plainspoken. He comes from Harry Truman’s state, and he carries Truman’s straightforward talk wherever he goes.

But Wednesday afternoon, as he prepared for what will be his final Open Championship – he played in and won his first at Carnoustie back in 1975 – there were things he just could not say. He does not want this to be his last time around at the British Open. If he could miraculously play himself into the top 10 at age 66 – earning another five-year invitation based on an odd past champions exemption – he would come back again. But he knows, deep down, that a top-10 finish will not happen.

And so he was left talking about things he does not like talking about, like regret. He refused to feel regret in 2009 when he was in position to win the Open at age 59 but bogeyed the 18th hole. “You know, I had so many times when I hit a shot that cost me a tournament,” he says, “but I had so many times in my career where I hit the shot that won me the tournament. So that balanced out.”

He refuses to feel regret about last year’s Ryder Cup, where his captaining was called into question by Mickelson and others. He made several controversial decisions, including sitting down Mickelson for the entire Saturday session. This was the first time he has publicly said that Mickelson and others (he includes himself) were speaking rashly out of the frustration of losing to the European team again.

“I did everything I possibly could in my own mind, with the help of my captains and the PGA, to have us win,” he says. “And it just wouldn’t … the other team was better.”

But as he ponders his final go around at the tournament that has defined him – he is the only American to have won five Open Championships – he does feel something like regret. And it is not something that is easy for him talk about.