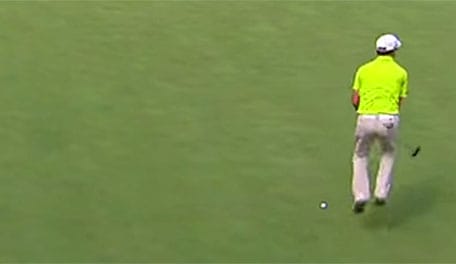 Silvis, Ill. – Zach Johnson stood over a 30-foot putt on the par-3 16th hole that would have tied him for the lead at 20 under.

He took the putter back, heard something that sounded like an explosion, and jumped in the air.

“I don’t know if it was like a pipe bomb or a backfire from a boat,” Johnson said. “I don’t have any idea, but I know it was loud, and I know I was about ready to hit my putt.”

According to David Feherty on the CBS television broadcast, the sound was from an air cannon on a pontoon boat heading down the Rock River, which runs adjacent to the 16th hole.

Johnson regrouped enough to make his par, but he never got to 20 under. And playing his first 11 holes in 6 under Sunday, Johnson closed with seven straight pars to shoot 6-under 65, post 19 under and finish in a tie for third with Danny Lee, one shot out of a playoff for the John Deere title.

Johnson, who serves on the tournament’s board of directors, didn’t win this event for the second time, but he finished in the top 3 for the fifth straight year. Sunday marked his 28th consecutive round in the 60s at TPC Deere Run.

“I love what this tournament’s about,” he said, as he’s said every other day this week. “I love this golf course and I’m comfortable here. It’s not always going to transpire what’s happened in the last so many odds years here, but I don’t want that streak to discontinue.”