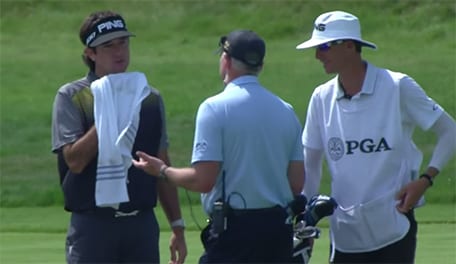 After missing the fairway at the par-5 fifth on Sunday, Bubba Watson called in a rules official in an attempt to take relief from an ant hill, leading to this epic exchange about the nature of ants as "burrowing animals." The conversation is transcribed below the video:

Bubba (to caddie Ted Scott): "It's a burrowing animal. It's digging a hole, so either way you look at it ..."

Rules official:"It's not fire ants or anything. There's no relief from them. That's a loose impediment there."

Bubba:"Okay, but I have a question for you. (Bent over, motioning to ground) Since the animal - it is an animal, right? You agree with that? It's burrowing. It's digging a hole. So how would it not be - it was either an ant bed, or it's an animal digging a hole. It's either one or the other. It can't be ... "

Rules official:"Well it's not classed as a burrowing animal."

Bubba:"So even though they dig in the ground, they're not considered burrowing. They're tunnel-making, is what we're calling them this week. Okay."

Bubba: "No, I gotcha. So if some guy was allergic to ants, and he got an ant on him, you could care less."

Rules official:"Unless, unless - (hands up) well we wouldn't care less - but it's only if they're dangerous ants, like the biting, fire ant ones."

After being denied relief, Watson still went on to make a birdie at No. 5, and then, after a separate conversation with Scott about whether to take his ball in high or low at the driveable par-4 sixth, he did this:

Watson made that 14-footer for eagle and turned in even-par 36 following a bogey at No. 7.

As for the distinction between burrowing insects and burrowing animals:

@LukeKerrDineen Def: Burrowing animal is an animal (other than a worm, insect or the like) that makes a hole for habitation. Ants are bugs.