Watson tees off on slow play 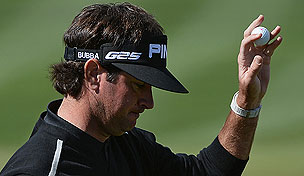 SCOTTSDALE, Ariz. – If the USGA hasn’t already recruited Bubba Watson to be a spokesperson for their next “While We’re Young” anti-slow-play campaign, maybe it should.

In multiple post-round interviews at this week’s Waste Management Phoenix Open, Watson was severely critical of pace of play on the PGA Tour.

“I don’t know if you know, but the PGA Tour plays slow. I don’t know if anybody has heard that before,” Watson deadpanned after a second-round 66 that left him tied for the 36-hole lead. The following day, after a five-hour, eight-minute round, Watson’s news conference comments included “We need to be under five hours tomorrow. I want to watch the Super Bowl. I want to get ready for the Super Bowl. Who cares about the golf? Under five hours tomorrow, boys. That’s not going to happen.” Later in the same interview, Watson said curing slow play “is not going to happen overnight. It just takes time; by that time I’ll be on the Champions Tour.”

When pressed how he would eliminate slow play, Watson said, “I have a lot of suggestions, but you have to penalize people. Fining them after 10 bad times is not going to scare anybody, but if you give them a stroke, a stroke affects that day, your momentum that day, your mindset for the week. It could cause you to win or lose because your momentum changes, hurts your retirement, hurts the FedEx Cup points, hurts everything.”

“I think the strokes is the only way to do it.”