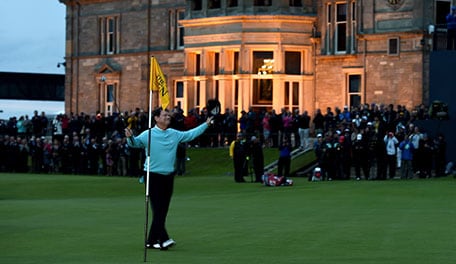 ST. ANDREWS, Scotland – At 9:54 p.m. local time, and with darkness quickly descending on the Old Course, the old champion rolled in one final putt.

Before a thinned but enthusiastic crowd, Tom Watson completed his final round in the Open Championship on Friday, an 8-over 80 that left him alone in last place in the 156-player field.

The five-time winner of the claret jug played his 38th and final Open Championship 40 years after winning his first Open in 1975.

Much like he did in 2009, when at the age of 59 he finished runner-up to Stewart Cink at Turnberry, Watson began his press conference with perspective.

“I told my son, I said, ‘Michael, there should be no tears, this should be all joy. There have been lots of wonderful memories we've had, we've shared here,’” he said.

It didn’t seem likely Watson would finish his final turn around St. Andrews after an early storm delayed play for more than three hours, but after players were given the option to stop playing after the 17th hole due to darkness the group – which included Brandt Snedeker and Ernie Els – decided to finish.

Although Watson never won an Open at St. Andrews he did finish second on the Old Course in 1994, and he savored the moment on Friday as he crossed the Swilcan Bridge and recalled a story about Bobby Jones playing a match at the Home of Golf the year after winning the Grand Slam in 1930.

“Walking up that 18th hole Bobby Jones was engulfed by thousands of people who had come out and heard that he was on the golf course,” he said. “When I was going up there just across the road, I think I had an inkling of what Bobby Jones probably felt like when he walked up the 18th hole.”