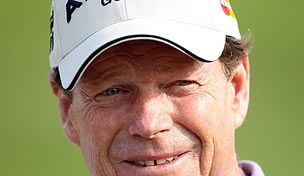 When Tom Watson took over as U.S. Ryder Cup captain in December 2012, Patrick Reed's name wasn't high on his list of potential players - in fact, it probably wasn't on his list at all.

After Reed's win last week at Doral vaulted him to No. 4 in the U.S. standings, though, it appears almost certain that the 23-year-old will play in Scotland for a captain 41 years his senior.

Speaking Thursday in advance of the Champions Tour's Toshiba Classic, Watson became the latest to add his take on Reed's brash post-round comments in Miami, offering the sort of well-rounded perspective that four decades among the professional ranks can create.

"Well, when you win, you have that aura that you're at the top of your game and it's hard for anybody to beat you," said Watson. "That's a good place to be. As we all know, the game can turn on you, and it will turn on you, and you'll go through the low spells."

While many bristled at Reed's attempt to put himself among the top five players in the game Sunday evening, Watson believes that the former NCAA champion deserves the accolades that come with winning three PGA Tour events since August.

While Reed appears likely to factor on an American squad at Gleneagles that seems to get younger by the week, world No. 1 Tiger Woods sits in 35th position on the latest points list, still looking to get his 2014 season in gear after battling back issues this month. Watson was clear that, health permitting, he would prefer to have Woods among his roster of 12 players come September.

"We have a very young looking team right now as you look down on it ... Then you have the fact that Tiger has not played well and is injured. There's a story in itself," said Watson. "I want Tiger to be on the team in the worst way, I just hope he's healthy enough to be able to play. It's really early yet, way too early to tell."