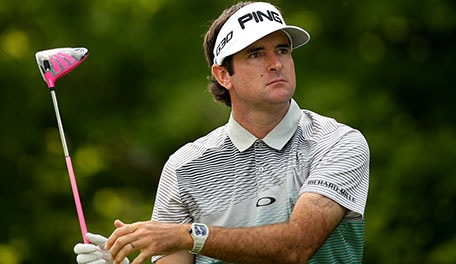 At No. 3 in the OWGR, Watson is the highest-ranked player in this week's field and making just his second start in Canada since 2009. He'll be joined by Furyk, the only player in the last 50 years to successfully defend a Canadian Open title (2006-07), and Clark, who outlasted Furyk to win last year's event at Royal Montreal.

When this event was last at Glen Abbey in 2013, Mahan held a two-shot lead after 36 holes but withdrew to be with his wife for the birth of the couple's first child. He will look to complete all four rounds this time and will play the first two with Kuchar, who has finished inside the top five each of the last two years in Canada, and Els, who has a trio of top-25 finishes in the last four years at this event.

Day enters off another close call at a major, having missed the playoff at the Open Championship by a shot. The Aussie is teeing it up in this event for the first time since 2009. Donald enters off a recent resurgence that includes top-15 finishes in each of his last three worldwide starts, while the trio is rounded out by DeLaet, sure to be one of the fan favorites at Glen Abbey and the lone Canadian ranked inside the OWGR top 100.

Koepka is making his tournament debut and appears to have found his stride once again after a T-10 finish at St. Andrews that included 37 straight holes without a bogey to close the week. McDowell has struggled mightily this season, with only one top-25 finish in 12 starts, while Piercy won this event in 2012 at Hamilton and enters off a win at the Barbasol Championship on Sunday.