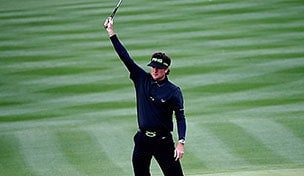 Getty Images
Ben Crenshaw of the United States waves to the gallery with his longtime caddie Carl Jackson behind the 18th green after playing his final Masters during the second round of the 2015 Masters Tournament at Augusta National Golf Club on April 10, 2015 in Augusta, Georgia. (Photo by Andrew Redington/Getty Images)  -

Low scores were once again plentiful Friday in Phoenix, which played right into the hand of one of the game's most aggressive players. Here's how things shape up after two rounds at the Waste Management Phoenix Open, where Bubba Watson holds a piece of the lead for the second day in a row:

What it means: After sharing the overnight lead with Y.E. Yang, Watson remained atop the standings with a 5-under 66 Friday as he looks to win on Tour for the first time since the 2012 Masters. He was joined at 12 under by Jones, who has now carded back-to-back rounds of 65 and looks to follow in the footsteps of fellow Australians Adam Scott and Jason Day by entering the winner's circle.

Round of the day: After missing the cut in surprising fashion last week at Torrey Pines, Brandt Snedeker rebounded quickly with a 7-under 64 Friday in Phoenix. The former FedEx Cup champion made it around TPC Scottsdale without dropping a shot, taking just 25 putts while rocketing into contention heading into the weekend. He's now 8 under overall and just four shots off the pace.

Best of the rest: Jones had five top-10 finishes last season on Tour and appears destined for another solid result this week in the desert after his second-straight 65. A 2001 graduate of nearby Arizona State, Jones carded seven birdies and now holds a share of the 36-hole lead for the first time in his career - a fact that likely pleases the scores of Sun Devil fans at TPC Scottsdale.

Biggest disappointment: With an opening-round 66, Keegan Bradley appeared poised to contend this weekend but instead played his way to an early exit Friday afternoon. The former PGA champ played his first 11 holes in 8 over, including a triple bogey on the par-5 third hole, and as a result became a victim of the 36-hole cut - the first time Bradley will miss the weekend since the 2013 U.S. Open.

Main storyline heading into Saturday: Phil Mickelson entered this week as the defending champion in Phoenix, and Watson hopes to carry the torch this time around from his fellow left-hander. Questions often surface over motivation for the former Masters champ, but he certainly appears dialed in through the first 36 holes this week. In order to capture his fifth-career Tour title, Watson will need to remain aggressive, as the chase pack includes English, already a winner this season, and Matsuyama, one of the game's rising stars.