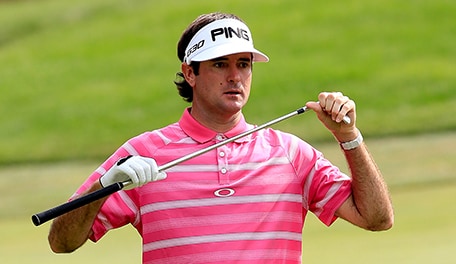 AKRON, Ohio – Bubba Watson made a Sunday charge at the WGC-Bridgestone Invitational, but in the end he fell just short.

Watson started the day four shots back, and he made a big move with a 4-under 66. While he got within one of leader Shane Lowry down the stretch, he ended up alone in second place, two shots behind the Irishman.

“At the end of the week, you always want a top-10, have a chance on Sunday, and I had a chance,” Watson said. “So it was close, but not close enough.”

Watson was even par through seven holes before reeling off four birdies in a six-hole stretch on Nos. 8-13. While a birdie on No. 17 gave him a chance to catch Lowry, Watson’s 74-yard approach on 18 flew well past the hole and he settled for a closing par.

This is Watson’s second straight runner-up finish, following his close call last month at the RBC Canadian Open. Given that his average of 311 yards per drive is third on Tour this season, Watson took advantage of the firm fairways this week at Firestone Country Club to launch his tee shots, including a 399-yard drive on No. 8 during the final round.

“I think they were joking in the locker room. I think it says on the app I averaged 378 [yards] this week in driving distance,” he said. “And I hit 50 percent of my fairways, so that’s a pretty good average for hitting it 378.”

Watson has missed the cut at each of the last two majors, but now he heads back with some momentum to Whistling Straits, where he lost to Martin Kaymer in a playoff at the 2010 PGA Championship.

“I played great there last time,” Watson said. “So if I can do that again, I’d love the place.”